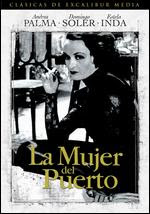 Through the history of the Mexican cinema, prostitution has been a subject widely explored by filmmakers almost since the beginning, taking the themes beyond the usual archetype of the "hooker with a heart of gold" to the point of almost developing an entire sub-genre out of them. It has been specially in genres such as tragedy and melodrama, where prostitution has been employed the most, as it is in those genres where the dramatic elements of the characters can be exploited the most. It wasn't a surprise that the first sound film made in Mexico was a new version of Federico Gamboa's novel "Santa", the tragic story of a prostitute which had been previously done in 1918 with a lot of commercial success. However, the film that would really take the image of the prostitute to almost mythical proportions in Mexican cinema would be the 1934 movie, "La Mujer del Puerto".

"La Mujer del Puerto" (literally, "The Woman of the Port") is the story of Rosario (Andrea Palma), a young peasant woman who lives poorly with her father Don Antonio (Fabio Acevedo), who works as a carpenter for the town's mortuary. However, tragedy strikes the family when Don Antonio falls seriously ill and is forced to stop working, complicating a lot their financial situation. To make things worse, Rosario discovers that her beloved boyfriend (Francisco Zárraga) is nothing more than a ladies' man who played with her and shows no interest in helping her. This revelation enrages Don Antonio, who then is decided to kill the treacherous man but their encounter will have very tragic consequences for Rosario, as Don Antonio gets killed in their meeting. Without anybody willing to help her, Rosario decides to become a prostitute in the port of Veracruz, but this is not everything that fate has reserved for her.

Loosely adapted from Guy De Maupassant's short story "Le Port", the movie was mainly written by Antonio Guzmán Aguilera and Raphael J. Sevilla (also assistant director), who really added a lot of Mexican flavor to Maupassant's tragic tale by setting the story in the port of Veracruz during carnival time. The writers were also the ones who decided to focus the story on the character of Rosario, the woman of the port, and while it may look at first like an obvious attempt to cash in the enormous success of "Santa", it's truly a decision that benefits the movie by increasing the dramatic potential of the story, as it allows a better exploration of the themes of guilt, pain and sacrifice. However, while the movie excels in its handle of melodrama and really has a great development of the character of Rosario, its narrative feels somewhat uneven, although a lot of this could also be blamed on the directing and editing of the film.

As one of the directors who arrived to Mexico in the early 30s with Sergei M. Eisenstein, director Arcady Boytler brought with him a lot of influence from the Soviet montage theory that Eisenstein had developed, and applied it through the film with several digress of success (sometimes remarkable, sometimes without any apparent sense). With a very good eye for the visual compositions, Boytler shows in "La Mujer del Puerto" a lot of influence from the German expressionist movement, resulting in an excellent use of Alex Phillips' cinematography, who creates beautiful contrasts of light and shadows that perfectly frame Rosario's tragic story and fill it with a powerful and often haunting atmosphere. While the direction of actors wasn't his strongest trait, in this movie Boytler manages to get very good performances by his cast, particularly from his débutant stars, Andrea Palma and Domingo Soler.

The acting by most of the cast is for the most part uneven, but fortunately, the actors in the main roles deliver performances so good that manage to elevate this aspect of the film to new heights. While definitely a bit old for the part, lead actress Andrea Palma is simply amazing as Rosario, displaying a enormous natural talent that makes easy to forget the slightly obvious detail about her age, and ultimately transforms a typically melodramatic character into a mythic and iconic role. The movie was also the debut of another big Mexican star, Domingo Soler, who in his small appearance (as the sailor that falls in love with Rosario) already shows that big charm and enormous presence that would become his trademark in the future. Comedians Arturo Manrique and Jorge Treviño (Panseco and Panque) appear in small roles that, while a bit out of place in the film, manage to be both funny and entertaining.

Now, while Andrea Palma is really divine in the movie, and Boytler gives the film an amazing look, "La Mujer del Puerto" suffers from several flaws that often diminish its worth among other classics from the same period. The main problem is, as written above, the oddly uneven way the story is structured, as it wastes a lot of time focusing on meaningless events (very long scenes of townspeople during the carnival for example) while very few is dedicated to the truly important parts of the plot. While I don't mind the slow pace and the way its used to build atmosphere in the movie, it feels strange and even out of place when compared to the very rushed way the movie ends. The change of pace is very abrupt, and one ends up feeling that something was missing in the whole thing.

Despite those very notorious flaws, "La Mujer del Puerto" is filled with truly otherworldly scenes that are of an almost magical beauty, and that almost manage to erase the negative impact of those flaws. While there were definitely better Mexican movies in the 30s, Arcady Boytler's "La Mujer del Puerto" still has a powerful magic that makes it a gem. Definitely a flawed masterpiece.