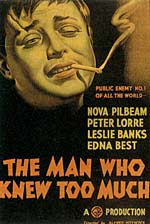 Very few artists have done as much for the thriller genre in film as British director Alfred Hitchcock, who not only was a pioneer of many of the techniques that would become widely used nowadays, but also across his career he literally invented a great amount of the rules that would shape the genre. While his career didn't seem to have started on the best way (his first movie, "The Pleasure Garden" was a failure), after the success of "The Lodger" in 1927, Hitchcock would become one of the most popular young directors in the United Kingdom, and it wouldn't take him much to be recognized worldwide. That recognition came in 1934, when his thriller "The Man Who Knew Too Much" was released, becoming his most acclaimed and successful movie to date and the one that would make him to be noticed by Hollywood. Not only this movie would introduce Hitchcock to America, it would also introduce one of cinema's most important actors: Peter Lorre.

"The Man Who Knew Too Much" begins in Switzerland, where Bob and Jill Lawrence (Leslie Banks and Edna Best) are on a winter sports holiday with their teenage daughter Betty (Nova Pilbeam). The reason for their visit is that Jill competes in a target shooting competition, and a family friend, Louis Bernard (Pierre Fresnay) competes in a skiing event. During a dinner, Bernard is murdered by an unseen shooter, but before dying he informs the Lawrences about a conspiracy to kill an important diplomat in London. The Lawrences are confused at first by the spy's revelation, but soon the confusion becomes a preoccupation, as the conspirators have kidnapped their daughter Betty in order to keep them quiet. Now the Lawrences know too much, and that knowledge may cost them their daughters, but while unable to tell the police their situation, the couple decides to find their daughter themselves.

The screenplay for "The Man Who Knew Too Much" was written by Edwin Greenwood and A.R. Rawlinson, although it was based on a story co-written by D.B. Wyndham-Lewis and Charles Bennett. While the writing of the film was a cooperative effort, it is Charles Bennett's style the one that's shown the most through the story. Bennett's plays and screenplays became the basis of many of the most representative Hitchcock thrillers, and one could say that along with the Master of Suspense, he shaped the genre in its early days. "The Man Who Knew Too Much" includes many of Bennett's trademarks such as criminal spies, their political conspiracies and the innocent people that are dragged unto them; all spiced up by a very British humor that makes the whole thing even more enjoyable.

While by 1933 Hitchcock already had made several remarkable films, "The Man Who Knew Too Much" is probably the first of his movies that truly can be considered as an emblematic Hitchcock film, as his style is finally shaped in this movie. Taking the best of Wyndham-Lewis and Bennett's story, Hitchcock brings to life a captivating tale of adventure and mystery that literally takes its innocent characters to the darkest alleys of London. Visually, the movie is a joy, as with the excellent work by cinematographer Curt Courant, Hitchcock shows the influence of German expressionism in his work and creates wonderful images of striking contrast between light and shadows. His dominion of suspense shines in many scenes of the film, particularly in an impressive sequence that serves as climax of the movie, where Hitchcock takes full advantage of the introduction of sound to movies.

The performances by the actors are of an excellent quality, with Leslie Banks leading the cast with his charming presence and very British wit. His ability to mix drama with comedy makes his character a very real and likable person, that portrays remarkably the everyman placed in an uncommon situation. While Banks truly makes a great job, the real star of the film is the amazing Peter Lorre as the leader of the conspirators. In this his first work in English, Lorre shows off his enormous talent and steals every single scene he appears in, a remarkable task considering this was his first movie in English and that he had to learn his lines phonetically. Edna Best is good, albeit nothing spectacular; quite the opposite are Frank Vosper and Nova Pilbeam, who make an amazing work considering their limited screen time. Hugh Wakefield has a very funny supporting role where he masterfully displays his talent for comedy.

When most people hear about "The Man Who Knew Too Much", the instant memory is often that of Jimmy Stewart and Doris Day trying to recover their kidnapped son in the 1956 version of the movie. That is because Alfred Hitchcock decided to remake this classic in color and with the benefits of being a more experienced filmmaker and having a bigger budget to do it. But even when the Master himself prefer the remake, personally I think that the original movie is the superior version. True, the 1934 version of "The Man Who Knew Too Much" is not a perfect film, it has an irregular pace (at times too slow, at times too fast) and its plot has some very unlikely situations; however, it has a great charm and a powerful style very difficult to ignore. It is certainly dated by today's standards, but while the remake is technically superior, this one has a heart.

After making this movie, the Master's career would only go higher and higher, as the next year he would follow the success of this film with another legendary masterpiece, penned again by Bennett: "The 39 Steps". It has been quoted many times that Hitchcock named this underrated movie, "the work of an amateur", as he stated his preference towards the 50s remake, but here I must disagree with the Master, as personally I think that this is the version of "The Man Who Knew Too Much" that should be seen.