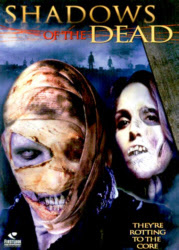 Zombies in film have certainly gone a long way since director Victor Halperin directed his Voodoo themed classic, "White Zombie" in 1932. The 1968 release of George Romero's "Night of the Living Dead" would change the story of horror forever by removing the Voodoo aspects of the zombie concept and reinventing them as mindless beings, driven only by the hunger for human flesh. After that influential classic, zombies became iconic villains of the horror genre and many different explorations on the subject began to be done by future filmmakers, creating an entire sub-genre around the supernatural flesh eaters. One of the most recent variations on the theme has been the idea of zombies being conscious about their condition, with Andrew Parkinson's "I, Zombie: A Chronicle of Pain" being a good example of this. Carl Lindbergh's "Shadows of the Dead" takes this one step beyond, by adding an interesting twist to the tale.

"Shadows of the Dead" is the story of John (Jonathan Flanigan) and Jennifer (Beverly Hynds), a young couple on their way to spending a nice weekend in a cabin. As they travel through the woods by night, they blow a tire and are left stranded without knowing where exactly they are and without any way to repair their car. The couple decides to spend the night there and fix everything by the morning, however, this is only the begin of their problems as next to their car they find what seems to be a dead body. However, the corpse wasn't really dead, and to their surprise it bites John, infecting him with a strange and unstoppable disease. Hiding in their cabin, it won't be too long until the couple discovers that what John has is not a normal infection, but the early symptoms of a rare disease that will change their lives and their relation forever.

Written by director Carl Lindbergh, "Shadows of the Dead" is a very interesting take on zombie films that attempts to mix the horror and suspense elements of the zombie sub-genre with a more ambitious psychological drama. In the same way that "I, Zombie" did before, "Shadows of the Dead" explores the process of dehumanization of the zombie disease, as the characters begin to experience the rotting of their bodies and an unstoppable hunger for human flesh. However, what makes this film different is the addition of romance to the mix, as unlike "I, Zombie", this movie is based around the relationship between John and Jennifer and how they face the horrors they have ahead. The dynamics of their relationship becomes the main theme of the film, and one could say that more than a horror film, this movie works like a "supernatural drama".

Aware that his screenplay is not one that plays with shock and scares, director Carl Lindbergh opts for a very restrained and subtle approach to the story, focusing on creating an atmosphere of dread that fits very well with the sense of impending doom that fills the character's contaminated lives. Taking advantage of his own budgetary limitations, Lindbergh gives good use to Roderick E. Stevens's minimalistic cinematography to achieve a realistic look, almost documentary, pretty much in the same spirit as Andrew Parkinson's "I, Zombie: A Chronicle of Pain". While the low-budget certainly hurts the film a lot, the movie showcases some pretty nice looking make-up effects by Frank Jackson and Ryusakae Yamaguchi that Lindbergh uses well; however, while most of this sounds perfect, the movie suffers from two major problems that diminish the success of its other elements.

The first of those problems is without a doubt the acting. While both Flanigan and Hynds have some good scenes and show some talent at times, for the most part the couple seems to be bored and uninterested, delivering their lines with a tone that attempts to sound deep but ends up sounding indifferent. Flanigan is the one with the biggest problems, as since his character is the narrator he's the one in charge of carrying the film, but in his narration he sounds simply uninterested in what he is saying. Hynds fares a bit better, and she manages to make some scenes truly work despite the poor script; but sadly in a film completely character driven, the poor performances end up damaging the final product in an enormous way. Still, the blame should not fall entirely over the actors' shoulders, as to be fair, the script they had to work with wasn't exactly a masterpiece, and most of the acting problems could be traced to the screenplay.

As written above, Lindbergh's take on the zombie genre is interesting and with an enormous potential to explore. While comparisons to the excellent "I, Zombie" can be made, the element of romance in the plot truly adds a new dimension to the story that makes it fresh; sadly, Lindbergh's screenplay fails to exploit that enormous potential and delivers a story that at times attempts to be deep and philosophical, but ends up being slow, boring and simply uninteresting. The problem is that in his attempt to make his horror film a meditation about love and death, Lindbergh uses very poorly written dialog that sounds amateur. While Lindbergh clearly has the talent to direct a good movie (for an indie film, this one looks very good), his flawed script tragically brings down a product with an enormous potential to succeed.

Working on independent cinema is hard, but despite the lower production values, the same old rule for mainstream films applies here: it's harder to make a good movie from a bad screenplay than from a good one. I have no doubts that Lindbergh, Hynds, and the rest of the crew did their best in the making of this movie; sadly, the screenplay was way too flawed to make a masterpiece out of it. Still, if you liked Parkinson's take on zombies in his "I, Zombie", check out Lindbergh's "Shadows of the Dead". Just keep your expectations low.