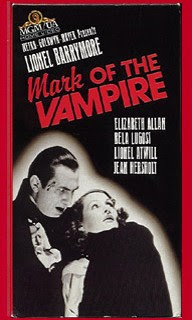 After the commercial failure of his controversial masterpiece "Freaks" in 1932, director Tod Browning found himself in serious problems to find new projects. Browning was a man of proved talent, being the director of some of the best silent films starring Lon Chaney as well as the mind behind the 1931 horror masterpiece "Dracula". However, "Freaks" proved to be too ahead of its time and sadly suffered the prejudices of audiences clearly unprepared for the tragic story of a midget in love with a full grown woman. In this state of disgrace, the studio rejected his projects and instead gave him the job of directing "Fast Workers", a melodrama with former silent superstar John Gilbert. Fortunately, luck was still on his side as in 1935 he was allowed to direct a remake of his successful silent "London After Midnight", a movie that would reunite Browning with Dracula himself: Bela Lugosi.

"Mark of the Vampire" is the story of the tragedy surrounding the wealthy Borotyn family. The patriarch, Sir Karell Borotyn (Holmes Herbert) has been murdered under mysterious circumstances, and soon everyone in town suspects it was the work of Count Mora (Bela Lugosi) and his daughter Luna (Carroll Borland), as these two deceased nobles are rumored to awake by night as vampires and wreak havoc in the small superstitious village. Inspector Neumann (Lionel Atwill) doesn't believe in this, as he suspects there is a more mundane motif for the murder of the rich old man, however, when Sir Karell's only daughter Irena (Elizabeth Allan) becomes the vampires' new target, Insp. Neumann will have to join forces with a strange scientist specialized in the occult, Prof. Zelin (Lionel Barrymore) to solve the mystery before someone else gets killed.

As written above, "Mark of the Vampire" is essentially a remake of the now lost classic "London After Midnight", although this time Browning enhances the horror elements of the story by focusing on the couple of vampires and their actions instead of the mystery of the plot. The story is pretty convoluted and very clever for its time, with a nice use of black humor (some even see it as a satire of horror films of it's time) and very surprising plot twists to keep the mystery a secret until the end. Sadly (and like always happened to Browning), the film suffered approximately 20 minutes of cuts by the studio, who disliked Browning's idea of incest as background for Count Mora among other things. Unable to fight the studio (as they were still mad at him for "Freaks"), Browning had to let them cut the film, leading to the creation of many plot holes in the already convoluted story, ultimately destroying most of its effect by enhancing its flaws.

As in most Browning's films, the power of the movie is in the haunting visuals conveyed by this master of silent films, images so powerful that in a way make up for the messed up and disjointed storyline. In fact (and like "Dracula"), most of the best scenes in "Mark of the Vampire" come when nobody talks and only the images are what carry the story. Taking his expressionist influences to the max, Browning makes the figure of the vampire to embody the ultimate vision of irresistible evil, as their unnatural shining in complete darkness makes them diabolically attractive. Browning always struggled with the use of sound, and this problem shows again in "Mark of the Vampire", although the high quality of his cast manage to improve Browning's direction in this "talkie".

Lionel Barrymore is very good as the eccentric Prof. Zelin, and while he receives some bash for giving an over-the-top performance, I think his acting is right on the money, as he is not a serious Van Helsing, his character seems to be wicked, almost as wicked as the monsters he fights, so his hammy touch is, in my opinion, very appropriate. Lionel Atwill shines as Insp. Neumann, bringing a sense of dignity to the film as the stoic hero who is forced to work with what he considers as superstitious fools in order to fulfill his mission. Borland and Luogsi are simply wonderful as the almost silent vampires, relaying mostly on gestures to convey their emotions. Jean Hersholt, Donald Meek and Ivan Simpson have nice turns in supporting roles, with Meek and Simpson delivering some nice comedy that seems to parody stereotypes of horror films of its time.

Sadly, the film (or what was left of it) suffers from many flaws that effectively make the brilliant parts of it look bad, leaving the final product as simply a slightly better than average 30s movie. Not only the cuts done by the studio ruined the storyline, as being honest, Browning's talent wasn't as fond of talkies as it was of silents. Browning was a genius of black comedy, but this skill couldn't translate well to sound movies and often his attempts of comedy look too over-the-top for the overall mood of the movie. To make things worse, the performances of Elizabeth Allan and Henry Wadsworth (the main romantic couple of the movie) are atrociously poor, paling in comparison to the work of the rest of the cast.

"Mark of the Vampire" is a very good film of Browning's short post-"Freaks" career, as despite being plagued by many problems, it still works as a nice tale of mystery and horror. It is definitely not the typical vampire movie, and a number of factors make me to be willing to believe that Browning intended this to be a satire than a proper horror (for example the fact that vampires are silent and humans are very talkative for example). While certainly not a masterpiece, it is a fine film to watch despite its troubled upbringing.