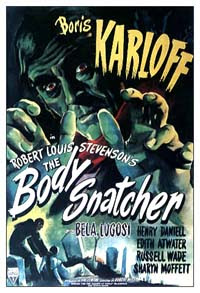 Between the years of 1827 and 1828, a strange series of murders took place in Edinburgh, Scotland, terrifying the population during the almost eleven months between the first attack and the capture of the criminals. At the moment of their capture, 17 persons had been killed by William Burke and William Hare in order to be sold as corpses to the Edinburgh Medical College for dissection, with the prestigious doctor Robert Knox as the main customer. This revelation shocked the nation and made the case (now named "The West Port murders") part of popular culture, and even sing-song rhymes were written about the case. Years later, famous writer Robert Louis Stevenson would become fascinated by the case, and in 1884 wrote the short story "The Body Snatcher" inspired by it. This short story would be the inspiration for a movie in 1945, a classic of horror starring the legendary Boris Karloff.

Set in Edinburgh in 1831, "The Body Snatcher" is the story of Donald Fettes (Russell Wade), a young student of medicine who is not doing well financially and will be forced to leave school. To his surprise, he is accepted as an assistant to his teacher of anatomy, the famous Dr. MacFarlane (Henry Daniell), who considers Fettes a promising student and is willing to aid him to remain in school. However, not everything is sweet for Fettes, as his new job will show him the dark side of his profession when he discovers that Dr. MacFarlane must pay John Gray (Boris Karloff), a cab-man, to bring him exhumed bodies from the cemeteries for his classes. But this will only be the beginning, as after meeting the sinister cab-man Fettes will discover that Gray is more than a mere body snatcher, as he knows a horrible secret about Dr. MacFarlane that gives him power over the reputed physician.

Written by producer Val Lewton (under his usual pen name "Carlos Keith") and popular crime writer Philip MacDonald, "The Body Snatcher" is a powerful psychological drama in that subtle style that Lewton mastered during his days as head of the horror unit at RKO studios. Using Stevenson's story as a template, the writers crafted a plot that explores some of the darkest aspects of the human soul in a way that mixes the story's Gothic origins with the films noir of the time. The screenplay excels in the development of the characters, as one can't help but feel for them as we follow their descent into the dark side. It also creates one of the most extraordinary and complex characters of horror in the figure of John Gray. Finally, it's worth to point out the outstanding quality of the dialogs, which is another of the elements that add a lot of class to the film.

"The Body Snatcher" was Robert Wise's second solo effort as a director after making "Mademoiselle Fifi" for Val Lewton a year before. Like in that previous work, Wise once again proves his skills to create a visually outstanding period piece under Lewton's low budgets, as he manages to create a very dark 1830s setting with great detail. As some critics have pointed out, "The Body Snatcher" is an effective throwback to the classic horrors of the 30s done by Universal, as Wise brings back the Gothic atmosphere of those movies and adds the subtle ambiguity of the RKO style imposed by Lewton, creating something that could be described as a "gothic film noir". As he would do years later in "The Haunting", Wise uses what he learned from Lewton and takes it beyond, creating stylish and horrific scenes based almost entirely on suggestion and mood than in unabashed shock.

While probably he'll always be known as the Creature in James Whale's 1931 classic "Frankenstein", British actor Boris Karloff wasn't exactly a one-note performer, and this movie is a clear testament of that. As John Gray, Karloff delivers what simply is the best performance of his career, transforming himself in this sinister man that can go from a sympathetic nice cab-man to the cruel and rude body snatcher that tortures Dr. MacFarlane's mind. However, Karloff is not the only one who makes a great job, as Henry Daniell is another of the highlights of the film in his performance as Dr. MacFarlane. RKO's regular Russell Wade completes the cast as young Fettes, and is very natural and believable in his role as the naive student. Edith Atwater and horror icon Bela Lugosi appear in minor roles, but both manage to steal their scenes with great talent.

During his short run at RKO studios, Lewton showed a great hand at picking the crew for his movies, and this movie wasn't the exception. Not only Robert Wise makes a wonderful job at directing the film, but also cinematographer Robert De Grasse adds his talent to the creation of many of the haunting scenes of the film. Wise learned a lot from working with Orson Welles, and together with De Grasse he employs Welles' techniques to the horror genre with excellent results. While personally I consider this movie among the best horror films ever made, it's worth to point out that modern viewers may feel the movie's pace a bit too slow, as this is not a movie that uses direct shock to be scary; this is a movie that moves around the creepiness of its ominous atmosphere and specially, the unsettling nature of its characters' psychology.

Morally ambiguous and of excellent craftsmanship, "The Body Snatcher" is probably among the best horror films ever made. Those who think that horror is nothing more than cheap entertainment will find that this film elevates the genre to the level or an art-form, and that there is more in Boris Karloff than Frankenstein's monster. Along with "Cat People" and "I Walked with a Zombie", "The Body Snatcher" is another proof that while short, Lewton's run at RKO was enormously influential for the horror genre.