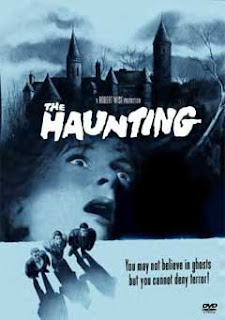 Ever since the beginning of civilization, stories involving ghosts and spirits have existed in many cultures worldwide, as the fascination with death and what comes after it is definitely a part of our nature. This fascination found itself at home in the horror genre, and became a trademark of the Gothic and romantic literature of the 18th century, as it was a natural source of inspiration for many different kinds of nightmarish stories. Of course, ghost stories would also make the transition to cinema and soon became staple of the horror film genre as a major source of macabre movies. As an important sub-genre within horror, many movies about ghosts have been made through the years, however, if there is a movie that has captured perfectly the essence of what a good ghost story is, and elevated the genre to the level of masterpiece, is definitely Robert Wise's "The Haunting".

"The Haunting" is the story of a house, "Hill House", an old mansion named after the hills that surround it. But Hill House is not a common house, as for over a century it has been known as one of the most sinister haunted houses with a past filled with death and madness. Dr. Markway, a famous scientist obsessed with the supernatural, decides to carry an experiment in Hill House in his desire to prove that the supernatural exists and that the haunting of Hill House is real. He invites a group of selected people whom he thinks are able to help him in his quest, but only two answer the call: the clairvoyant Theo (Claire Bloom) and Eleanor Lance (Julie Harris), a shy woman with a mysterious past. Luke Sanderson (Russ Tamblyn), heir of the house, joins the group as a skeptical with an interest in his inheritance. However, what they'll discover at Hill House, will change their lives forever.

Written by Nelson Gidding, "The Haunting" is an adaptation of Shirley Jackson's 1959 novel, "The Haunting of Hill House", probably the most famous ghost story published in modern times. Despite some changes to the characters, the movie is relatively faithful to its source, although Gidding removes the slight comic relief the novel has and completely focuses on the psychological horror of the story. This is best exemplified in the way the script deals with Eleanor, who while arguably the "main character" of the story, is also the most psychologically vulnerable, and this is reflected in the way Hill House reacts to her. The script is remarkably effective in the way it develops its assortment of characters and their relationships, as well as in the subtle ambiguity in which the supernatural events of the haunting take place.

This subtle ambiguity that impregnates the script is superbly made to come alive by director Robert Wise, who in a masterful exercise of the power of suggestion, manages to create an ominous and very powerful atmosphere of dread using only the effects of light and sound. With an excellent camera-work and the wonderful black-and-white cinematography by Davis Boulton, Wise literally transforms Hill House into a full fledged character on its own. Having started his directing career at RKO Studios under the guidance of legendary producer Val Lewton, Wise knew exactly how to make atmospheric horror with minimal resources, and in "The Haunting", he returns to that subtle, minimalist style to exploit the psychological drama of the story. However, "The Haunting" is not only a very good looking film, as Wise's skills at directing actors are also fundamental part of the success of the movie.

As expected, the cast performances are of enormous importance as well, as while the film is heavy on the visual style to create atmosphere, most of the film's strength is in the development of the characters. Leading the cast is Julie Harris as Eleanor Lance, and she delivers an amazing performance (probably her best) as the shy and troubled woman. Many have criticized her performance as excessively whining, or irritating, but that criticism fails to see that it was natural for her character to come up that way. It is that way because she is meant to contrast with the uninhibited Theo, played superbly by the beautiful Claire Bloom, who adds a strong sexuality to her character. Richard Johnson plays Dr. Markway, and he is very effective in his role, as he adds a lot of charm to his character. Finally, Russ Tamblyn is pitch perfect as the skeptical rich kid Luke.

While "The Haunting" is definitely among the best horror movies ever made, it is relatively easy to see why modern audiences may face a challenge to like it. The main problem is definitely the slow pacing the movie has to build up the story, as while it's essential for the development of the events surrounding its grand finale, those used to the fast paced action of modern horror movies will definitely be disappointed. However, this is not to say that the movie has lost its edge, on the contrary, the failed 1999 remake, which essentially worked the opposite way than this movie (by having a fast pace and an extensive use of special effects), ultimately proved that such changes weren't necessarily for the best. Still, modern viewers should approach this film in the right mood to fully appreciate the beauty of its craftsmanship.

Considered among the best horror movies ever made, Robert Wise's "The Haunting" is without a doubt a classic of the genre that every horror fan should give a try. Unsettling and atmospheric, "The Haunting" took the ghost story on film and elevated it to an art-form, becoming the epitome of the genre. 18 years after making "The Body Snatcher", Wise made another masterpiece of horror in the shape of "The Haunting", and ghost stories never were the same after it.

Must check this one out. Love a good ghost story.