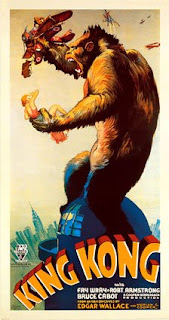 On the aftermath of World War I, two different yet very similar men crossed paths with each other while working on behalf of Polish war relief: Captain Merian C. Cooper met cinematographer Ernest B. Schoedsack in Ukraine and one of the most important partnerships in cinema was born. Cooper was fascinated with cinema, and began to collaborate with Schoedsack directing documentaries. However, this two men weren't typical filmmakers, they were real adventurers with a desire to transmit the thrills of their expeditions in their movies. After several successes in this field, the duo began to make fictional films, and in 1931 the two adventurers decided to use a movie to give their audiences the most amazing adventure ever conceived. It would take them 2 years to finish it, but the result would be simply marvelous: "King Kong".

"King Kong" is the story of Carl Denham (Robert Armstrong), a filmmaker known for his movies set in exotic lands, who has a new and mysterious project but finds himself unable to find a star for the film. On the street he meets Ann Darrow (Fay Wray), a young woman who has been driven to poverty by the Great Depression. Denham convinces Darrow to join his crew, offering her a the starring role in his movie. And so they sail aboard the freighter 'Venture' and head to Denham's secret location. As the ship gets closer to it, Denham reveals them that the place they are looking for is a secret island where a legendary monster named "Kong" is supposed to live. It is only after Ann Darrow gets kidnapped by the island's inhabitants when the director discovers what he has come to find: Kong, the giant gorilla, is real, and now that he has Darrow in his hand, the crew will have to venture into the dangerous jungle to save her.

The story's mix of horror, fantasy and adventure was conceived by famous crime writer Edgar Wallace and Merian C. Cooper himself, but the actual script was completed by James Ashmore Creelman and Ruth Rose (Schoedsack's wife), who developed the story and in the process created one of the most memorable adventure films in history. While the plot is certainly simple, it's filled with a constant series of thrilling scenes that literally reinvented the adventure genre in film due to their influence on subsequent films. Also, there is a good deal of character development despite some clichéd (even for the time) dialogs. The fact that Rose and the directors were notorious adventurers on their own account (Apparently Denham and Driscoll are based on Cooper and Schoedsack respectively) gave the story a strong sense of realism despite its fantastic plot, as the adventure echoes the group's real expeditions.

Director Ernest B. Schoedsack was definitely the best man for the job of making Cooper's ideas a reality, as his great eye for visuals and remarkable technical proficiency were instrumental in the making of this, the duo's greatest challenge. It is clear that the directors knew how to raise the suspense before the revelation of Kong, as the slow pace the film has before the arrival to the island enhances the suspense and the mystery about what is truly out there, perfectly building the right mood for what's coming next. It is also obvious that Cooper knew how to give a great show, as just as soon as the monster is revealed, the movie becomes a roller-coaster of action and adventure of enormous proportions, effectively capturing that feeling of adventure that Cooper wanted to transmit. Finally, the innovative use of the music by Max Steiner to create atmosphere is the icing of the cake in this masterpiece.

While nowadays the style of the dialogs may sound corny, the performances of most of the cast were very good, specially considering that the real star was "Kong". Robert Armstrong is excellent as the enthusiast (and obsessive) filmmaker Carl Denham, and effectively portrays a man who would do anything and go anywhere to give the greatest show to his audience. As the ship's mate Jack Driscoll, Bruce Cabot makes a good job as the "hero" of this adventure, who like "Kong", gets fascinated by the beauty of the movie's new actress. Cabot's character is the typical heroic character, but he manages to make him natural and human. Finally Fay Wray gives the performance of her lifetime as Ann Darrow, as while her range as an actress was limited, in this movie she has the chance to fully show the extent of her talents, effectively delivering an iconic performance.

However, the real star of this show is without a doubt Kong himself, who thanks to the astounding work of special effects done by Willis H. O'Brien and his team, achieves a characterization never before seen for a character that was entirely created by special effects. O'Brien, who had previously worked his magic in the silent classic "The Lost World", creates in Kong his masterpiece as he makes this monster look alive and able to express feelings better than most actors. While the directors and the writers do deserve credit for this character, it was ultimately O'Brien who gave the final touch to the legendary monster, making us feel identified with the confused beast as it faces the attack of the world. Even now, more than 70 years later, his work of animation in this movie remains one of the finest ever made.

If there is an adjective that can describe adequately the impact of this movie in history, that would be "mythic", as very few movies have left in our culture an impression as deep as "King Kong" did. Not only the image of the movie's grand finale is still one of the most powerful scenes in cinema, but this movie effectively created a legend out of the sad story of its title character and the exciting adventure that took him to New York. A masterpiece in every aspect.