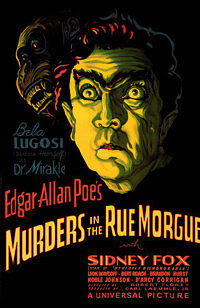 After the enormous success of Tod Browning's "Dracula" in 1931, producer Carl Laemmle Jr. finally proved that his vision had been correct and that the horror genre was an excellent source of stories to film. With that in mind, he began to work immediately in a follow up for that success with an adaptation of Mary Shelley's immortal novel, "Frankenstein", in the expressionist Gothic style of Browning's film. The film was set to be written and directed by French director Robert Florey and starred by the recently discovered Hungarian star of "Dracula": Bela Lugosi. However, people at Universal changed the plans and assigned the film to British director James Whale, who had a different idea for the movie and replaced Lugosi with Boris Karloff. Owing a film to both Florey and Lugosi, Universal gave them a project based on a tale by Edgar Allan Poe: "Murders in the Rue Morgue".

Set in Paris during the late 19th Century, "Murders in the Rue Morgue" is the tale of a series of unsolved crimes where women are abducted and murdered by an unknown method. Since the murders began to take place after a carnival arrived to the city, young medicine student Pierre Dupin (Leon Ames) suspects that Dr. Mirakle (Bela Lugosi), a scientist who owns one of the sideshow attractions, is behind the crimes, but so far he finds himself unable to prove it. His suspicion has its source in the fact that Mirakle has claimed to be looking for a way to finally prove that man and ape are related, and apparently has been experimenting on his sideshow attraction: an intelligent ape named Erik, which Mirakle claims is the missing link. Dupin fears that Mirakle's experiments are related to the murders, but the truth is far more horrible than what he thinks.

"Murders in the Rue Morgue" is not exactly a faithful adaptation of Poe's short story, as the script (written by Tom Reed, Dale Van Every and Robert Florey himself) focuses more on the reasons behind the murders than on the investigation done to solve the case. It is because of this reason that it is Dr. Mirakle who is in the spotlight while Poe's famous character, Dupin, has been transformed from cunning detective to a young student of medicine. With this change, the writers allow themselves to completely focus on horror, and deliver one of the darkest and most violent stories among Universal's classic horrors. However, as many have already pointed out, the story is not only an exploration of Poe's tale, but also a charming tribute to German expressionism's most celebrated triumph, "Das Cabinet Des Dr. Caligari", as the plot mirrors the classic silent film in more than one way.

The tribute to "Caligari" is not only a part of the script, as director Florey, aided by the legendary cinematographer Karl Freund and the wonderful art direction by Charles D. Hall, extended the tribute to the overall visual look of the film, following the expressionist style to the letter with an amazing use of light and shadows to create a powerful and haunting atmosphere. However, not everything is lifted from German expressionism, as Florey adds his own realist style to the mix resulting in a powerful combination that enhances the violence of the script. As the film was done before the Production Code was introduced, Florey manages to bring to life a lot of the vicious images of the script with an amount of detail that would be impossible a few years later. Sadly, Florey's skills at directing actors aren't as good as his skills with the camera, and some bad performances end up damaging the movie a lot.

While Florey doesn't seem to direct his actors as good as he does with the visuals, Bela Lugosi shows off his talent in a tremendous performance that's probably among the best of his career. As Mirakle, Lugosi is incredibly believable as a demented scientist, and despite being one of his most menacing roles he even manages to be sympathetic at times. The sadly ill-fated Sidney Fox is also good as Camille, the damsel in distress of this eerie horror, but sadly her counterpart, Leon Ames, isn't up to the challenge. While he later proved to be a talented actor, in this movie Ames delivers an awful performance that looks stagy and simply out of place in the movie. Bert Roach, who plays his sidekick, is not much better, as his delivery of comic relief is mediocre at best and ludicrous at worst.

This varying quality of the performances and the sharp contrast between them and the superb visual look of the movie may had played a part in the relatively disappointing reception the film had at box office, but the main reasons the movie failed was probably the fact that the audience wasn't ready for the dark nature of the plot and the violence displayed on screen. In fact, there are rumors stating that Universal removed almost 20 minutes of the original cut, taking away scenes supposedly too violent for being released. Anyways, whether this rumor is true or not is ultimately irrelevant, as the film's main problem is still in the actors' performances and that's something that missing footage hardly could improve. It is a shame that one of Lugosi's best performances ends up in the same film as one of Ames' worst.

Despite its many troubles, Robert Florey's "Murders in the Rue Morgue" is still an effective tale of horror and mystery that keeps the classic Universal feeling to the max. Dark and atmospheric, it is also an unusual movie due to its raw portrayal of violence on film. While not exactly a classic of the level of Universal films like "Frankenstein" or "The Black Cat", this movie is definitely a must see if only for Karl Freund's masterful cinematography and Bela Lugosi's amazing performance.