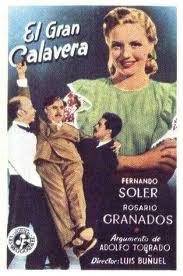 During the last half of the 40s, filmmaker Luis Buñuel was facing difficult times. In exile from Spain after the Civil War, blacklisted in Hollywood because of his communist leanings, and on top of that a box office bomb (1947's "Gran Casino") as his debut in Mexican cinema; future seemed bleak for the surrealist director. The promising artist behind those innovative surreal ventures of the 30s was now, almost twenty years later, broke and unable to find a job. Once again, it would be producer Oscar Dancigers (producer of "Gran Casino") who would help Buñuel to get back on track. Dancigers and legendary Mexican actor Fernando Soler were planning an adaptation of Adolfo Torrado's popular play "El Gran Calavera" ("The Great Madcap"), with Soler acting and directing the film. However, Soler felt that handling both jobs was going to be difficult, so he asked Dancigers to find a director: "anyone". Dancigers called Buñuel and introduced him to a man whom would become one of his closest friends and collaborators: writer Luis Alcoriza.

"El Gran Calavera" tells the story of Ramiro de la Mata (Fernando Soler), a rich widower in a perpetual state of drunkenness, whose alcoholic ventures often end up with him being unable of remembering what has happened. The state of near unconsciousness in which he spends most of his time has allowed Ramiro's family to exploit him and making him finance everything they want. Ramiro's offspring Eduardo and Virginia (Gustavo Rojo and Rosario Granados), his older brother Ladislao (Andrés Soler) and also Ladislao's hypochondriac wife Milagros (Rosario Granados), are all literally parasites exploiting Ramiro to the point that his company approaches bankruptcy. This prompts Ramiro's younger brother Gregorio (Francisco Jambrina) to take action and conceives a plan to bring Ramiro back to sobriety: his family will pretend to have been driven to poverty due to his alcoholism. Facing the threat of bankruptcy and the idea of having their lifestyle finished, Ramiro's family decides to go along with Gregorio's plan, but a change of events will soon make them face real poverty.

Adapted to the screen by Luis Alcoriza and his wife Janet, "El Gran Calavera" is a quite light-hearted comedy of manners that even when apparently harmless, it does contain its fair share of social criticism hidden behind the laughs. With the contrast between social classes as the background for most of the comedy, it's easy to label "El Gran Calavera" as a fierce social criticism towards the bourgeoisie (specially since Buñuel is involved); however, the Alcorizas' storyline is more a criticism towards laziness and ignorance (and alcoholism while we are at it) than anything else. Certainly the rich bourgeoisie end up the worst, with Ramiro's family being spoiled and lazy but, the poor are also far from being noble. The real nobility, according to "El Gran Calavera", ultimately comes from the mix of knowledge and hard work, represented by poor yet hardworking Pablo (Rubén Rojo), Ramiro's brother Gregorio (a wise psychologist), and by Ramiro himself, whom we discover was a skilled businessman and successful self-made man before turning to alcohol.

While once again working as a hired gun, Buñuel certainly must have found the subject closer to his sensibilities than his previous venture with Dancigers in "Gran Casino". The conflicts between social classes found in "El Gran Calavera" and the dissection it does of both the wealthy and the poor (light-hearted perhaps, but still sharp) are themes that Buñuel had been exploring since the 30s, and so this time he plays them for comedic purpose with good results. Toning down the surrealism (but never really abandon it, as the first and last scenes will show) and with a more urban style, Buñuel finally makes his more complete fictional film since his 1929 debut, "Un Chien Andalou" (though considerably less influential). Later Buñuel commented that his understanding of what he calls "normal cinema" was developed while shooting "El Gran Calavera". If we take "normal cinema" as "conventional narrative cinema" then yes, it does show him with greater domain of the craft, and finally able of making the movie his own without betraying neither himself nor the story.

Acting through the film is of great quality, as while the genre and style call the cast for overacting, it never really feels exaggerated, and fits naturally within the near satirical tone Buñuel gives to the story. Naturally, it's mainly Fernando Soler's show, and he truly makes the most of it. As Ramiro, Soler goes from bumbling drunken buffoon, to a wisecracking Groucho-like wit, and then to the strong patriarchal figure that made him an icon in Mexican cinema. As Ramiro's brother Ladislao, Fernando's real life brother Andres Soler delivers a solid performance, and along Maruja Grifell (who plays his wife Milagros), are the comedic highlight of the film, both being appropriately hammy and explosively over-the-top. The younger cast is not as lucky, but for the most part they make a good job. Gustavo Rojo plays another over-the-top character, Ramiro's son Eduardo, but unlike Grifell and Soler, he is more annoying than funny. Finally, Rosario Granados as Virginia and Rubén Rojo as Pablo are the romantic couple of the film, and while effective, at times they lack passion as a couple.

Buñuel's second venture in Mexican cinema is certainly a more successful one than his previous "Gran Casino". For starters, the Alcorizas' story is better built and has a lot more energy, with every character receiving enough time to get to like them. True, they are initially a bunch of typical stereotypes in a typical fish-out-of-water scenario, but the way the story unfolds (and Buñuel's directing of his cast) make them fresh and new again, almost realistic and natural. On the down side, despite the film's charm, it can't avoid some of its problems. Some actors do feel at times too theatrical, and overall the overacting style used in the film may not be everyone's cup of tea. Also, Ezequiel Carrasco's work as cinematographer is good but clearly uninspired, a shame since the story goes to different settings (from Ramiro's mansion to the miserable apartment building he takes his family) that could had been enhanced with a better work. In general, the film's production values are clearly lower than in "Gran Casino" but, to his credit, Buñuel makes the most out of them, relays on his cast and overall builds up a better film.

Certainly, "El Gran Calavera" is nowhere near the work Buñuel would make later so, it would be easy to dismiss it as a light-hearted comedy done for hire and of interest for Buñuel's fans only; however, despite its many shortcomings, "El Gran Calavera" truly has a certain magic and special charm that make it a quite enjoyable story to watch y its own means. Closer to Buñuel's idiosyncrasies, "El Gran Calavera" is a return to the social criticism that Buñuel loved in his films, although here we have him making of Ramiro an oddly sympathetic portrait of a member of the bourgeoisie. The film became a huge success when released, and helped Buñuel to build a good reputation as a responsible and hard-working director, able to work efficiently with limited resources. It would be thanks to this success that Buñuel became finally able to make a film of his own choice. And his choice would be to make what's now considered amongst the best Mexican films of all time: "Los Olvidados".