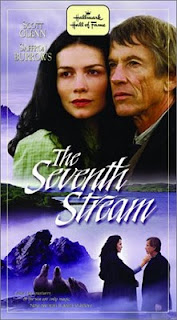 Irish mythology is probably not as well known in the world when compared to Egyptian or Greek mythology, due that most of the rich set of myths were lost after the country's conversion to Christianism; however, while the ancient myths of the ancient Celt religion may not have survived the changing times in their entirety, many of its equally rich variety of legends and stories have been preserved and still are part of the Irish culture and folklore. Among this legends, are the tales about the existence of the Selkies, legendary creatures able to transform themselves from seal to humans by shedding their seal skins, and who like to visit fishing towns from time to time in order to interact with humans. More often than not, the Selkies in the stories are female, and deal with them meeting the local fishermen. John Gray's "The Seventh Stream" is a Hallmark television movie based on this particular Irish legend, and since filmmaking is pretty much a modern incarnation of the ancient art of storytelling, this can only prove that old myths are pretty much alive.

Set in Ireland during the early 1900s, the movie is the story of Owen Quinn (Scott Glenn), an aging fisherman who 5 years after the dead of his wife, still can't move on with his life and spends most of his time outside the town's society, practically as an hermit still mourning his loss alone. Times are harsh for the village with fish being scarce and apparently, only his former apprentice Thomas Dunhill (John Lynch) seems unaffected by this. Dunhill has been seen with a strange woman (Saffron Burrows), but Owen doesn't care much to gossips and remains stoic in his isolation. However, one night the woman appears to him in his home, claiming to be a Selkie, and asking for his help to recover her skin. Without her skin, she is unable to return home, and would be bound to land for life. Helping the mysterious Selkie to find her way home, Owen discovers a new way to see life, and before he knows it, he falls in love with the strange woman. But the legends also have said that romances with this creatures of the seas are always doomed.

Written by director John Gray (whom is probably better known by his work on the TV series "Ghost Whisperer"), the story offers a quite faithful to the themes of Irish legends, and really showcases a good representation of these kind of tales. Basically a romantic tragedy (like most of the Selkies' stories in folklore), the film is entirely focused on the character of Owen Quinn, and how his relationship with the Selkie Mairead helps him to open his heart again and discover new sources of happiness in his life. Those changes in Owen begin to get noticed by his old friend, Mrs. Gourdon (Fiona Shaw), who also has feelings towards him. True, none of this is new, and the twists are definitely a bit clichéd by now but, the slow and careful way in which Gray builds up his story (as well as it's beautiful and interesting setting) gives the story a breath of fresh air. Gray's attempt at portraying life in a small Irish fishing town during the early years of the 20th Century in a realistic (though not entirely accurate) way shows that a good and serious effort in research was done.

As a director, John Gray opts for a very straight forward approach to his story, keeping it simple and linear by essentially following the classic conventions of the romance melodrama almost to the letter. This restrained way of filmmaking results in a subtler, classy style that fits naturally with the storyline of "The Seventh Stream". After all, it is the classic way of making melodramas, and director John Gray does show a certain domain of the genre, as all the right notes are there and he drives his movie with an appropriately smooth pace. Unfortunately, this also shows some lack of imagination, as this closeness to the formula for crafting melodramas makes it enjoyable yet predictable; and on top of that, the editing makes quite notorious that this is a movie made for television. Despite this, Gray adds some really good elements to the film, such as the great use he gives to Seamus Deasy's cinematography. A native of Ireland himself, Deasy captures the magic of the Emerald Island in beautiful images that are also quite fitting for the TV screen.

However, I think that Gray's best trait in this film is his direction of actors, as it is their performances what truly make this movie to stand out among the rest of Hallmark films (and perhaps TV movies in general). Scott Glenn is excellent as Owen Quinn, giving the character the necessary emotion and depth required. It could be said that Glenn looks wooden, but I find him really appropriate, as Quinn is not exactly a character prone to show his emotions, and Glenn's stoic and emotionless stance adds presence to his role. Actress Safforn Burrows plays Mairead, the legendary Selkie who will change Quinn's life. While not really amazing, Burrows is effective and makes a good job, despite being a tad overshadowed by other cast members. The supporting cast is also worth of notice, with every actor adding a lot of presence to the characters. Among them there are great performances by Fiona Shaw, John Lynch and Joseph Kelly; but the one who shines the most is definitely Eamon Morrissey as Owen's friend Willy. The perfect portrait of Irish's attitude, Morrissey steals every scene he is in.

Certainly, and considering the lower production values of TV films, "The Seventh Stream" has very good elements going for it: a remarkable work of acting from its cast, Deasy's superb photography and Ernest Troost's wonderful score (indeed better than the average for a TV film); however, it is in the end that faithful way Gray follows the conventions of television dramas what truly diminishes its quality. While Gray makes the most out of his low budget, he can't escape the cheap resource of editing the film in episodic cliffhangers for commercial breaks, and unfortunately, this narrative devise is used in a very exaggerated and obvious way. Instead of enhancing the emotions generated by the film, this ends up spoiling it and breaking the built mood. And as written above, Gray's classicist way of crafting this melodrama is, while indeed elegant and subtle, a bit too obvious and predictable for its own good, resulting in an entertaining yet sadly forgettable. But still, to Gray's credit, those are the only major flaws in an otherwise worthy TV film.

Overall, despite its problems, John Gray's "The Seventh Stream" is a very good story of romance with a beautiful Irish setting that manages to capture the fantasy and romance of the folktales that inspired it. The really great performances by the cast and the wonderful cinematography really make up for the story's clichés and the conventional way the movie was done. Although on a second thought, aren't those clichés what one really wants to find when watching this kind of stories? Gray has a double edged sword in them here, as those expecting clever twists may be disappointed, but those with a taste for classic melodramas will find a film that against all odds, plays the right tones, and delivers exactly what's expected from it. It's not exactly a classic of the genre, but it's a nice and entertaining way to spend a rainy evening.