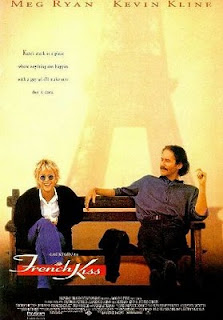 Usually, romantic comedies are not really taken seriously as they tend to be seen as simple and formulaic fluff meant only to provide light hearted entertainment. Like in action films and horror films, the overuse of the enormous amount of clichés and typical plot devices, has turned the sub-genre into a formula where stories are predictable and the twists glaringly obvious, and all because the genre's basic structure has been done countless times before. While this predictability is definitely a problem, occasionally a movie appears that despite once again following the exact typical pattern of the genre, manages to stand out among the rest; and even when at its core it still is a typical romantic comedy, it shines with a light of its own due to some special magic that could only be described as "charm". "French Kiss" is one of those movies, a film that despite being no masterpiece of cinema, achieves its original purpose without problem: to provide good light hearted entertainment by telling a charming story about two equally charming characters.

"French Kiss" is the story of Kate (Meg Ryan), a young woman who after moving to Canada, where his boyfriend Charlie (Timothy Hutton) lives, begins to make preparations for her future life next to him. However, all her plans crumble when on a business trip to France, Charlie meets another woman, Juliette (Susan Anbeh), and falls deeply in love with her, to the point that he decides to remain in France and cancel his wedding plans with Kate. Deeply hurt by Charlie's decision, Kate decides to overcome her terrible fear of flying and travels to France, decided to recover her boyfriend and continue with her life plan. On the trip she is seated next to Luc Teyssier (Kevin Kline), a somewhat rude yet charming Frenchman with whom she engages in a conversation. This will only be the beginning of her adventure with Luc as the odd Bon Vivant she has met has hidden a stolen piece of jewelry in her purse to get it past customs, and now he wants it back. Problems begin when Kate's purse is stolen, forcing both to work together to recover the stolen purse, and its contents.

Written by Adam Brooks, "French Kiss" certainly follows the basic blueprint of romantic comedies: it chronicles the misadventures of a couple that initially dislikes each other but that after being forced to spend time together begins to discover the growth of a certain attraction between them. At first sight it would seem that it's just another typical romantic comedy (one with the welcomed benefit of a romantic French setting); however, and despite its far fetched plot, writer Brooks makes the story fresh and even believable, and it all surprisingly works in the end. While the romance between two different and apparently incompatible people is the main focus of the film, Brooks also makes some cleverly written scenes playing with the stereotypes French and American people have of each other in small, yet very funny scenes that make one fall in love with his assortment of quirky supporting characters. "French Kiss" is not exactly the definition of realistic, but in the end is this romanticizing of the story what becomes the film's main strength.

Director Lawrence Kasdan takes a straight forward approach to the script, and lets the natural charm of his cast to be the driving force of the film. It is really his work with the actors what makes the story come to life, as he manages to get them to break their archetypal characters and make them more natural and human, resulting in a film a bit more believable and natural than what the script (formulaic as it is) made it to be. Certainly, Kasdan still can't avoid the use of some silly and definitely unrealistic dialogs, but the performances of his cast make everything work to an extent. The real star of the film is Owen Roizman's cinematography, who under Kasdan's direction portrays France's both urban and countryside landscapes with great talent, making the amazing beauty of the country to show off in many scenes. Following Brook's running theme of making jokes about American tourists, Kasdan constructs some visual gags that spice up the love story between Kate and Luc, add some diversity and keep things up and running.

The cast is what really makes "French Kiss" to stand out among similar movies. At the peak of her "romantic comedy phase", Meg Ryan was delightfully charming as the main character, Kate. With her natural charm and talent, this character was definitely piece of cake for her, and she makes what otherwise could be a two dimensional character a bit more enjoyable. Kevin Kline is the highlight of the film, making a very convincing Frenchman in his portrait of Luc. It's kind of a shame that the producers decided to hire a non-Frenchman for the role, but fortunately Kline delivers an excellent performance as the witty crook (while his accent isn't really good, his natural acting made that irrelevant). Timothy Hutton is definitely the weakest link in the cast, as not only his character was badly written, his performance is not really good and looks really out of place in the film. French actors Jean Reno and François Cluzet have small supporting roles, but they truly make the best out of them, with Cluzet showcasing great talent for comedy and Jean Reno completely stealing every scene he is in.

As written above, the script is plagued with a good share of flaws, and while some are somewhat corrected by the work of Lawrence Kasdan and his cast, there are details that do hurt the film. Like many romantic comedies, "French Kiss" is based on a far fetched situation (perhaps even more so than others), but the problem is not how unlikely is the situation that makes the couple meet, but in the poor initial setting of the story's events. With the probable exception of Luc, the rest of the characters begin underdeveloped, and their personalities and actions feel initially a tad random. Hutton's character is simply badly done and never believable in his choices (a problem, considering that his actions set the plot in motion). Ryan's characters is slightly better conceived, but it does take Meg Ryan's performance to make her real and likable, as Kate is not exactly a sympathetic character to begin with. Don't get me wrong, the story is charming, but it's truly lousy beginning makes obvious that what happens before the trip was written just to justify Kate's going to France.

Light-hearted and charming, "French Kiss" is a very 90s romantic comedy with certain touches of those classic screwball comedies of old, where realism was sent to the backseat and the mix of comedy and romance used to drive the story. The pairing of Ryan and Kline works wonders and achieve moments of genuine fun. While far fetched and formulaic, Kasdan plays the right notes and what results is a major example of how to fully exploit the main themes of the romantic comedy, and create an entertaining film that manages to make those themes to feel fresh and new again. Ultimately "French Kiss" may be far from a masterpiece of the genre, like say "Annie Hall" or "When Harry met Sally" are, but "French Kiss" gets the job done thanks to the charming performances of the cast, and the magic of the French landscapes.

I like your review J Luis.
French Kiss may not be Meg Ryan's best romantic comedy but it does provide good entertainment and there's great chemistry between Meg and Kevin Kline.
I agree with your comparison to the old screwball comedies as well, similar to another 1990's rom-com One Fine Day with George Clooney and Michelle Pfeiffer.

90s romantic comedies had something special, didn't they? Like a more down-to-earth aproach to the theme, between the 80s and 00s obsessions with what's hip and hot.

Hey, too much criticism! It's a perfect movie.