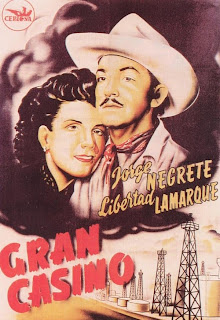 The political climate in continental Europe during the 30s was quite convoluted and the rise of Nazism in Germany and the outbreak of the Spanish Civil War meant the exile for many of its inhabitants. Amongst them was Spaniard filmmaker Luis Buñuel, who moved to the U.S. and found a job in the dubbing department of Warner Brothers. Blacklisted for his communist ties and unsatisfied with his job, Buñuel accepted an invitation by old friend Denise Tual, to direct a film for her husband, producer Roland Tual, in Mexico. Thanks to Tual, Buñuel met French producer Oscar Dancigers, another refugee who had escaped from World War II in 1939. Dancigers had established in Mexico an independent film production company that found some success during World War II. Tual's project was canceled but Dancigers wanted to work with Buñuel, so he offered him a job directing a musical film with two of Mexico's most popular stars: Mexican singer Jorge Negrete and Argentinian singer Libertad Lamarque. "Gran Casino" was the film that inaugurated Buñuel's Mexican period.

Also known as "Tampico" (the place the film is set), the movie is set in the early years of the twentieth century and tells the story of friends Gerardo (Jorge Negrete) and Demetrio (Julio Villarreal), two prison cell-mates who after escaping from prison, find job in an oil company owned by Argentinian José Enrique Irigoyen (Francisco Jambrina). Irigoyen is an idealistic entrepreneur, but his plans go against those of Heriberto (Agustín Isunza), local gangster and owner of the Grand Casino of the title. Heriberto kidnaps and murders Irigoyen, but the two friends decide to not let Irigoyen down and stand aside his benefactor's ideas, keeping things going at the oil company. Things get more complicated when Irigoyen's sister Mercedes (Libertad Lamarque) arrives and suspects that Gerardo and Demetrio are involved in her brother's disappearance. Her investigation takes her to get a job at the Grand Casino while Demetrio disappears as well. It'll be up to Gerardo to discover the truth and win Mercedes' heart. And sing a variety of tunes while he's at it, or course.

Taking Michel Weber's novel "El Rugido del Paraíso" ("The Roar of Paradise") as basis, the screenplay was written by Mauricio Magdaleno, who had already penned several quite popular Mexican films. By all accounts, "Gran Casino" is pretty much a basic musical melodrama in the style that had been popular in Mexico since 1936's classic "Allá en el Rancho Grande": underdog hero faces the rich and corrupt villain in a rural setting, confusion arises between lovers and there's lots of singing. True, this formula was nothing new, and by 1947, it was already starting to die in front of the noir-inspired urban melodramas of the 50s; however, there is a certain theme in Magdaleno's screenplay that gives this old story some sparks of interest: the political angle of the oil topic, which carries a subtle anti-capitalism theme. Mexico nationalized oil in 1936, and "Gran Casino" initially seems to follow the official idea that private oil companies were evil. Nevertheless, the movie's final answer is to literally blow away the problem about oil.

Basically working for hire with a strictly commercial goal, a formulaic storyline and two popular stars to work with, director Luis Buñuel crafts his film effortlessly and remains for the most part faithful to the typical structure of the musical melodrama. However, even amidst the constrains of the movie's purely commercial intentions, the surrealist artist found places to express his very own idiosyncrasies. The most famous and noticeable of these little touches is probably the surreal way the Trío Calaveras appears out of nowhere to serve as backup chorus for Jorge Negrete's character in every song (surprising even him). Another would be the way Buñuel toys with the political angle of the story. Taking thinly veiled jabs at capitalism and even Nazism; Buñuel seems to make oil and politics ultimately unimportant for our very human characters, in an apparent preference for anarchism. There is also a complete rejection to sentimentalism, so passionate kisses are avoided, resulting in a film that plays like a melodrama, but at the same time is also the antithesis of melodrama.

As written above, "Gran Casino" was conceived specially to feature the talents of stars Jorge Negrete and Libertad Lamarque. Both respected singers and actors, their performances in the film result effective and appropriate. Nothing spectacular, but both get the job done without problem. As Buñuel himself stated later, the idea was to get them to sing and sing a lot, so their talents are exploited to full effect in several musical numbers that showcase their quality. Unfortunately, they never sing a duet in the film (strange, being this a musical with romance), although this may be part of Buñuel's choice to avoid sentimentalism. The rest of the cast is for the most part good, with Meche Barba standing out as the sultry femme fatal of the Casino. She truly gives her role a strong presence that certainly, leaves a lasting impression (considering how limited her character is, that's quite an accomplishment). Also worth of notice is the comic timing of Fernande Albany as the perpetually drunk French refugee Nanette.

Unfortunately, despite having all the ingredients of classic Mexican musical melodramas, Buñuel's "Gran Casino" fails to convince and ends up an unsatisfying experience. And the reason is ultimately that yes, it has everything it should have (beautiful songs, great singing, good performances, Jack Draper's ace cinematography, bits of suspense, action and comedy... well, everything), but it never goes beyond its own unoriginal commonness. True, Buñuel's touches are scattered through the film, but only as brief occurrences, as if cowardice or boredom (probably the latter) prevented him of going any further with it, leaving the feeling of an effective yet ultimately uninspired piece of work. By 1947, musical melodramas in rural settings (the "Comedia Ranchera") were old news, and Mexican audiences' preference was verging towards urban settings in dramas, noir thrillers and even comedies. Also, it's worth to point out that while their performances are really good, both Negrete and Lamarque look a tad too old for their roles, something specially noticeable in Lamarque's case.

Given its place in Buñuel's career as a completely mainstream commercial film between his early surrealist works and the success of "Los Olvidados", it's easy to dismiss it as a mistake in the master's filmography (the fact that it flopped at the box office does not help). Nevertheless, there are good things to appreciate in "Gran Casino", particularly the singing of both Negrete and Lamarque, and Jack Draper's work of cinematography. Granted, that may not be enough, but it's something. Personally, I think that amongst its flaws, the worst thing that "Gran Casino" has against it is the reputation of Buñuel himself, which makes the unoriginality of this little musical to feel a worse crime than what it is. In the end, "Gran Casino" is by no means a bad movie, just a quite average one. But it was only the beginning of Buñuel's career in Mexico.