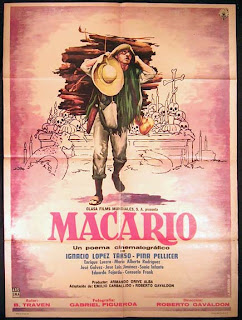 Perhaps one of the most amazing figures in modern literature is that of the enigmatic author B. Traven, whom despite having been a successful writer during his lifetime, to this date the details of his life remain unsolved mysteries. Better known for having written the novel "Der Schatz der Sierra Madre" ("The Treasure of the Sierra Madre", basis for John Huston's classic film of the same name), very few is known about the mysterious writer, and even his nationality is a matter of debate (clues point to him being either American or German). What is know for sure is that at certain point in his life, Traven traveled to Mexico and became fascinated with the country's rich culture and natural beauty, as well as with its complex social issues. The novella "Macario" (published in German as "Der Dritte Gast", literally, "The Third Guest", but known in English as "The Healer") is another of his best known works, and the source novel of one of Mexico's most fascinating and beautiful films: Roberto Gavaldón's "Macario".

Macario (Ignacio López Tarso) is a very poor indigenous lumberjack during the Colonial Mexico, whose only dream in life is to be able to eat a roasted turkey all by himself, as he always has had to give up his meals so the rest of his big family can eat. On the eve of Mexican "Day of the Dead" celebration, his wife (Pina Pellicer) steals a turkey and hides it from her kids, as she is decided to make Macario's dream come true. The following morning she gives Macario the turkey for lunch, and the happy lumberjack rushes to the forest to eat it. Deep in the woods with his wife's gift, Macario is about to eat his cherished meal when three strangers ask him to share his food. Macario denies it to the first two, but feels compassion for the third (Enrique Lucero), who later reveals himself as Death. In exchange for the meal, Death gives Macario a water that has the power to cure everything. With Death's gift Macario will become a famous healer who'll receive the attention of the entire region, but also of the Inquisition.

Adapted by writer Emilio Carballido and director Roberto Gavaldón himself, the movie remains relatively faithful to Traven's story (itself an adaptation of the classic German fairy tale "Der Gevatter Tod", or "Godfather Death") and retains the mix of harsh realism and dark fantasy that lays at the core of the short novella. Like Traven's fable, the screenplay of "Macario" is filled with symbolism, enriched by the added details regarding the Mexican culture and the traditional celebration of the Day of the Dead. Not only the film begins during the Day of the Dead celebration, but several parallels are drawn between the Mexican tradition and the film's plot, particularly the personification of Death not as an enemy, but as a companion, as a friend to share a meal with. Traven's usual anti-capitalism can still be felt in Carballido and Gavaldón's screenplay, which several times points out the class difference between the poor family of Macario and the rich house of Don Ramiro, the wealthy landowner played by Mario Alberto Rodríguez.

As usual with Roberto Gavaldón's films, his direction in "Macario" is technically impeccable, though the film also proves that Gavaldón wasn't merely a technically proficient craftsman, but also an interesting and quite accomplished artist, worthy to be considered amongst the greatest directors of Mexican cinema. Like its source novel, "Macario" is heavily symbolic, with the Mexican death-related imagery playing a significant role in building up the powerful atmosphere of dark fantasy the film has (a particularly remarkable scene is Macario's nightmare, which shows an influence of Luis Buñuel's surreal cinema). The film as a whole walks the line between a sense of realism (reflected in the relationships between social classes) and one of full surrealist fantasy, which could make the film to be somewhat related to the magical realism. Legendary cinematographer Gabriel Figueroa makes one of his finest works in this film, capturing breathtaking images of supernatural beauty that enhance the dark atmosphere of Gavaldón's fable.

While Figueroa's photography is truly a highlight of the film, it's worth to point out that the cast also makes a wonderful job in bringing to life the characters of Traven's "Macario". 1960 proved to be an important year in the career of legendary actor Ignacio López Tarso, as he got his first important roles in this movie and in "La Sombra del Caudillo". As the lead character, Macario, López Tarso shows a great natural charm and a strong presence in his role, as well as a great skill for facial expression. While at times his performance feels a bit stagy, in "Macario" he already shows why he later was considered as one of the finest Mexican actors ever. "Macario" was also the first role of Pina Pellicer's and one of her best in her sadly short career (she committed suicide four years later). Her work is so full of realism and is so natural, that conveys a strong emotion despite her limited screen time. Enrique Lucero completes the cast with a haunting, yet charming performance as Death, that appears to Macario as a poor and badly nourished shepherd.

In many of Roberto Gavaldón's films, death and fate play instrumental roles in the story lines, and in "Macario" this is perhaps taken to its most symbolic extreme. But as written above, Death is not an enemy, but an ally for Macario. Not necessarily an evil force, but an element of balance. Macario is just able to twist that balance a little bit, as Death itself is still ruthless, and fate still is unmovable. Interestingly, the clearly defined evil force is actually human, shaped in the envy others feel at watching Macario's success as a healer. Again, Traven's anti-capitalism is present: evil is the all too human feeling of envy. While "Macario" hasn't aged that well (it's special effects for example, are terribly dated), the movie still retains its haunting atmosphere of dark fantasy, an unnatural charm perhaps better defined as "magic", that makes it captivating. The sheer beauty of Figueroa's images, coupled with the marvelous work of acting put together by the hand of Gavaldón result in a powerful and fascinating film.

While "Macario" went on to earn multiple awards across the globe (including an Academy Award nomination for Best Foreign Language film), the film wasn't that well received in country as it was accused of being an artificial and overtly nationalist bait designed to win foreign awards. While the critics of its time may have a point in the film's use of folklore, "Macario" stands as an undeniable achievement of great technique and artistic value. Full of symbolism and owner of an impressive work of cinematography, "Macario" remains as one of Roberto Gavaldón's best films, and one of the last gems of the "Mexican Golden Age", which by 1960 was already in decline. An amazing example of Mexican filmmaking, "Macario" is a definitive classic of the dark fantasy genre.

The Bloody Pit of Horror said...

Great movie and review. This is one of my favorite Mexican movies, though I still have a lot more to watch!