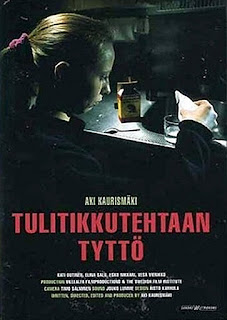 After the success of his 1988 film "Ariel", Finnish director Aki Kaurismäki produced the movie that would gave him international recognition: "Leningrad Cowboys Go America". A bizarre road movie about the misadventures of a Russian rock band in America, "Leningrad Cowboys Go America" would become a landmark in Kaurismäki's career. However, after this success, Kaurismäki decided to return to the themes he had previously explored in "Varjoja paratiisissa" and "Ariel", the stories of the underdogs, the losers, the dispossessed members of the working class who struggle everyday in the coldness of Helsinki to find something close to happiness. Titled "Tulitikkutehtaan tyttö" and released in 1990, the movie completed a thematic trilogy along "Varjoja paratiisissa" and "Ariel", which is now known as "The Proletariat Trilogy". Nevertheless, while similar, "Tulitikkutehtaan tyttö" is a bit different to the other two films, as it's one of Aki Kaurismäki's darker films.

"Tulitikkutehtaan tyttö" or "The Match Factory Girl", is the story of Iris (Kati Outinen), a young lonely woman living a dull and monotonous life in Helsinki. Working at a dead-end job in a match factory, and supporting her uncaring mother (Elina Salo) and her forbidding stepfather (Esko Nikkari), whom she gives most of her meager salary. There's little joy in Iris' life, who spends her free time reading cheap novels and attending to nightclubs, hoping to meet the man of her dreams. Unfortunately, this never happens, and her social life is a disaster. One day she saves enough money to buy herself a new dress, much to the displeasure of her family who wants her to return it. Iris keeps it anyways and goes out, finally finding a dance partner in Aarne (Vesa Vierikko). They spend the night together, though Aarne thinks she is a prostitute and their relationship doesn't end well. When Iris finds out that she's pregnant, things get even worse, but she is also read to take revenge on the world.

While covering the same themes and obsessions as the other two films in the "Proletariat Trilogy", "Tulitikkutehtaan tyttö" represents a notorious break in terms of tone, as this time, Kaurismäki's trademark brand of dry comedy is downplayed and leaves room to a truly bleak and depressive tragedy. Like other Kaurismäki's anti-heroes, Iris lives with an iron-clad stoicism, facing the constant abuses from the people around her. However, for Iris there is no love or hope to inspire her, as the world seems to pretend that she doesn't exist. As if she was just another machine in the match factory, her life passes day after day in the same monotonous pattern. Heartlessness is common in Iris' world, and yet, amidst the big atmosphere of melancholy and despair, there are still brief glimpses of Kaurismäki's deadpan humor through the film. His comedy is not absent in "Tulitikkutehtaan tyttö", just hidden, waiting to deliver a masterful lesson in irony that's the icing of the bleak cake that is "Tulitikkutehtaan tyttö".

The dialog in "Tulitikkutehtaan tyttö" is minimal, yet remarkably efficient. Everything that needs to be said is said, not a single line is wasted, and if images alone can tell the story, then so be it. It is certainly a case of "less is more", a supreme triumph of simplicity in storytelling, as the minimalist approach Kaurismäki employs, as cold and distant it may look, surprisingly proves to be no less expressive than flashier visual styles. This minimalism, that Kaurismäki had been perfecting with each work, can finally be seen at its best in "Tulitikkutehtaan tyttö", which reveals the Finnish director as a master of composition. With sparse camera movements, Kaurismäki conceives a visual narrative that's as efficient as it is economical, making of "Tulitikkutehtaan tyttö" to be almost a purely visual tale. The work of cinematographer Timo Salminen, Kaurismäki's regular collaborator is worthy of praise, as he captures the bleak gray world of Iris' Helsinki with realism and a certain degree of tragic beauty.

Yey, as remarkable as Kaurismäki's work of directing is, a huge part of the triumph of "Tulitikkutehtaan tyttö" is due to the effective performance of Kaurismäki's muse Kati Outinen as the match factory girl, Iris. In role completely different to the one she played in "Varjoja paratiisissa", Outinen truly creates a haunting portrayal of a tragic woman. With subtle gestures and deeply expressive eyes, Outinen says a lot with her silence, and in that expressive silence, she makes Iris to stand for every abused women, regardless of nationality. Perhaps even for every abused people, regardless of sex. As Aarne, Vesa Vierikko is equally great, making a painfully realist character that could had easily been nothing more than a mere archetype. In fact, most characters in the film could had been mere archetypes if it wasn't for the actors who play them. Case in point, Elina Salo and Esko Nikkari, who play Iris' parents. Particularly Esko Nikkari offers a remarkable performance that, like the film itself, says a lot in very few lines.

While certainly "Tulitikkutehtaan tyttö" offers a colder and darker vision compared to his previous films, Kaurismäki still remains a humanist in "Tulitikkutehtaan tyttö", as while the film showcases a series of humiliations that Iris survives with naive stoicism, there is never a hint of miserabilism in the treatment. It's all frank and honest in its portrayal, something that could be seen as distant and harsh on Kaurismäki's part, but that it's actually a compassionate view without any trace of artificial dignity. This becomes clear as Iris begins to plot her revenge. Kaurismäki's dispossessed ones are never examples of "nobility in poverty" and in fact, Iris' tragedy slowly begins to show its true colors as a Kaurismäki comedy. The blackest, the bleakest, the most depressive and melancholic one, but a comedy at heart. The comedic turn that this tragedy makes is not a cheap one, it's not a betrayal to the tone set by the rest of the film, it's more like Kaurismäki's bittersweet irony raising up a wry smile.

Somber, depressive, yet powerfully evocative, Aki Kaurismäki's third part of the so-called "Proletariat Trilogy" may be a difficult film to watch, but it's certainly one that leaves a strong impression. "Tulitikkutehtaan tyttö" of "The Match Factory Girl", bears all the trademarks of a Kaurismäki minimalist film taken to the max: sparse dialog, slow rhythm, minimal camera movement. Everything is there, as a final statement of his thoughts about the reality of Finland's underdogs as he sees it. It's a harsh view, but an objective one. void of cheap romanticism, Kaurismäki's view on the dispossessed is, despite all the bleakness, a humanist one. Certainly the fate of Iris, the match factory girl is hard. But for a moment, she may be able to raise a smile.

I'm so glad you enjoyed the film, it truly is one of his more depressing films but still has a heart. Can't wait for you to review "Mies vailla menneisyyttä" or his new film Le Havre!

Love reading your reviews in general!

Kat! How are you?

Yes, this one was my favourite of the trilogy for that precise reason: it's big heart.

Thanks for the kind words!