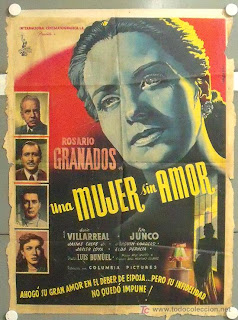 In 1951, Spanish director Luis Buñuel returned to the spotlight when he won the Best Director Award at the Cannes film festival for the Mexican film "Los Olvidados". Nevertheless, while this success allowed him greater control over his future projects (reflected in 1952's "Subida al Cielo"), the Spanish filmmaker still had to work within the constrains of the industry, an industry dedicated to its audience. The same year Buñuel released the surreal comedy "Subida al Cielo", he also made a more traditional melodrama dedicated to satisfy the commercial demand. That film was "Una mujer sin amor", which went on history as the movie that Buñuel disliked the most amongst all the film in his career. Certainly, the film's origins weren't really the best, as producer Sergio Kogan (who had previously employed Buñuel in "Susana") wanted to have another hit and asked Buñuel to simply copy André Cayatte's film version of Guy de Maupassant's "Pierre et Jean". Naturally, Buñuel didn't, and the result was perhaps the least Buñuel of the Buñuel films.

In "Una mujer sin amor" (literally, "A woman without love"), Rosario Granados plays Rosario, a young and beautiful woman married to an old antiquarian, Don Carlos Montero (Julio Villarreal). Their marriage is difficult, as Don Carlos is a dominant man, prone to scolding both his wife and son Carlos (Jaime Calpe). One day he is particularly harsh with his son, and the boy runs away from home, being found the following day by an engineer named Julio Mistral (Tito Junco). Don Carlos and Rosario are very grateful, and soon Julio becomes friends with the Montero family. Rosario and Julio begin an affair, as she confesses that she has never loved her husband, having married Don Carlos just for his money. Julio tries to convince her to run away with him to Brazil, but she refuses. Twenty years later, Carlos (Joaquin Cordero) and his younger brother Miguel (Xavier Loyá) have graduated from medical school, but suddenly, the Montero family receive the news that Julio has died in Brazil, and left all his money to Miguel. Carlos, begins to unveil the secrets of his mother.

As written above, "Una mujer sin amor" is a new version of Guy de Maupassant naturalist novel "Pierre et Jean", adapted to the screen by Jaime Salvador with dialogs by Buñuel's regular collaborator Rodolfo Usigli. Taking "Pierre et Jean"'s storyline as the basis, Salvador builds up a traditional melodrama centered in the person of the Mother. In Mexican melodrama, the figure of the sacrificed mother became a recurrent archetype, as an idealized moral center willing to suffer the misdemeanors of both her husband and her children due to her incommensurable love. An archetype that Buñuel turned upside down in "Los Olvidados" with the character of Pedro's Mother. However, in "Una mujer sin amor" the archetype is played seriously and becomes the focal point of the film in a consummately traditionalist manner. Not as a parody, not as a satire, but for real, a classic family melodrama of the most refined variety. But still, beneath the reverential traditionalism, the story lends itself to certain touches that makes it stand out amongst the rest.

In purely technical terms, "Una mujer sin amor" is impeccable. The greater production values allowed Buñuel to create one of the most lavishly realized films of his Mexican period. Gunther Gerszo's production design shines through the camera eye of seasoned cinematographer Raúl Martínez Solares, which works efficiently in the upper-class urban atmosphere of the story. Buñuel's visual narrative is at its best, as within the constrains of the melodrama genre, he succeeds in crafting a film with a strong identity of its own. It is certainly a typical melodrama, but one that stands out by the undeniable level of its craftsmanship. And yet, as traditional as the film is, it has its particularities. For starters, the story moves away from the brother's rivalry and remains focused heavily on the mother, Rosario. While Carlos drives this second half of the film, it's always Rosario's story what's being told. Not for nothing the title changed from "Pierre and Jean" (the sons in Maupassant's story) to "A woman without love".

As the woman without love of the title, Argentine actress Rosario Granados is remarkable as the sacrificed Rosario, a woman torn by a complex mixture of feelings: her regret for having married Don Carlos without loving him, her love for Julio, and her love for her sons. A woman with a lot of love to give, but who opts to repress her bigger love, her love for Julio. As in her previous film with Buñuel ("El Gran Calavera" in 1949), Granados once again displays a natural talent and strong screen presence. More experienced now, Granados also showcases a certain bittersweet subtlety that distances her from classic mother figures of Mexican melodrama. As her son Carlos, the young Joaquín Cordero is a highlight of the film, easily overshadowing Xavier Loyá, who plays his younger brother. As the elder Don Carlos, Julio Villarreal is delightful, building up a character that can go from nice to hateful in a whim. Titu Junco is sadly the weakest link, as his tenure as the engineer Julio isn't really a satisfying one.

Impeccably done, and beautifully looking, if "Una mujer sin amor" has a flaw is precisely how typical it ends up being. The fact that it's a work by the master of surrealism Luis Buñuel, only enhances the feeling that the film lacks that spark that the legendary Spanish filmmaker puts in his surrealist works. Certainly, "Una mujer sin amor" tackles themes that had been previously explored in countless melodramas, not only Mexican, but in general. In this aspect, there's nothing new, nothing fresh, no groundbreaking narrative structure, no outlandish visual style. Not even the black humor, so characteristic of Buñuel is present here. As it is, it's by all accounts just a film done for the paycheck. Nevertheless, it wouldn't be fair to dismiss "Una mujer sin amor" as quickly as Buñuel himself does, because within its genre, "Una mujer sin amor" is a film full of great style and a classy atmosphere. Certainly not what is expected from Buñuel, but it even makes a case for the independence of women, with Rosario's final speech taking a jab at traditionalism.

Closer in spirit to the cinema of Alejandro Galindo than to Buñuel's own filmography, it's not hard to see why Luis Buñuel dismissed "Una mujer sin amor" as his worst film: it's certainly the one that has less of his idiosyncrasies. Nevertheless, while its decidedly commercial purpose may overshadow its artistic value, the merit of "Una mujer sin amor" is the high level of craftsmanship that Buñuel had achieved by that point in his career. After having learned the hard way how to make commercial films for the Mexican industry, and having returned to glory with his masterpiece "Los Olvidados", the genius of Buñuel was now unleashed and found its way to shine even in the most typical and traditionalist story lines. It's impossible to deny that many directors would be proud to have "Una mujer sin amor" as their worst film.