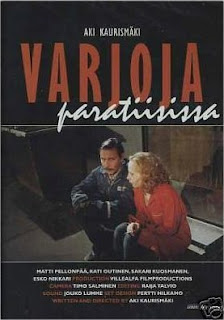 In the early 1980s, cinema of Finland experienced a grand renovation, as a new generation of young filmmakers erupted to reinvigorate the Finnish film industry. At the head of this new era were the Kaurismäki brothers, Mika and Aki, whose film "Valehtelija" (released in 1981, directed by Mila and written by Aki) represented both a heartfelt tribute to the French New Wave and a rupture with the Finnish old-guard. Two years later Aki Kaurismäki debuted with the feature length film "Rikos ja rangaistus", an adaptation of Fyodor Dostoevsky's classic novel "Crime and Punishment". Its follow up, the absurd comedy "Calamari Union" gave more insight about Kaurismäki's idiosyncrasies, but it would be in his third film, "Varjoja paratiisissa" where the Finnish director would fully establish the path his vision of cinema was taking. The first part of a thematic trilogy (collectivelly known as the Proletariat Trilogy), "Varjoja paratiisissa" is an introduction to the bleak black comedy of Kaurismäki's Helsinki.

Known in English as "Shadows in Paradise" (the literal translation), "Varjoja paratiisissa" is the story of Nikander (Matti Pellonpää), a shy and lonely garbage man living in Helsinki. One day and old co-worker Esko (Esko Nikkari) proposes him to join a new company he is starting, and while Nikander accepts, the project is finished when Esko dies of a sudden heart attack. This event begins to affect Nikander, and gives him the courage to invite Ilona (Kati Outinen) to a date. Ilona is a supermarket clerk, lonely like Nikander but with the aspiration of leaving Helsinki for good. The date goes wrong and a melancholic Nikander gets drunk and ends up in jail, where he befriends Melartin (Sakari Kuosmanen), who later joins Nikander as a garbage man. Ilona loses her job at the supermarket, and decides to begin an on-again off-again relationship with Nikander, whom is surprised by this. However, this is only the beginning for the stoic garbage man, who harbors dreams of stop being a loser.

"Varjoja paratiisissa", written by Kaurismäki himself, is at its most basic, the story of a lonely man looking to give some meaning to his life. Romance ends up playing a central part in the plot, but "Varjoja paratiisissa" is by no means a romantic comedy, or at least, not one in the traditional sense. Nikander, the protagonist, has spend his life just existing, until the dead of his old co-worker triggers an urge to do something else in life. An impassible stoic man, Nikander tries, fails and tries again without making a big fuzz about it. On the other hand, Ilona's more desperate attempts to improve her condition make her a more impulsive character. Their pairing is odd, and their relationship a difficult one, but in the end, most couples in real life are this way. Love, in the bleak world of Kaurismäki, isn't the solution for the problems, but it certainly helps to make easier the handling of the absurdities of life. Kaurimäki's view of the underclass is neither condescending nor harsh, just bittersweet.

The tone of "Varjoja paratiisissa" is decidedly ironic, with Kaurismäki preferring deadpan delivery for his comedy instead of a more overstated or energetic one. This simplistic low-key approach, which would become one of Kaurismäki's most familiar trademarks, is strangely fitting in the gray coldness of Helsinki that the director captures through the camera of Timo Salminen (Kaurismäki's regular cinematographer), which oddly, gives a warm feeling to this coldness. In a way, Salminen captures the warmness of humanity, who struggles through the absurdities of life looking for meaning. The struggle itself seems to be the point in "Varjoja paratiisissa", which finds its humor in its characters' apparently pointless and pathetic quests. And yet, there's neither cynicism nor condescension in Kaurismäki cinema, but a more honest naturalist contemplation of the absurd. Ultimately, the quests prove to be neither pointless nor pathetic, as amidst all the depressive bleakness, there's always some enlightenment.

Playing an extrapolation of the character he played in Kaurismäki's earlier "Rikos ja rangaistus", actor Matti Pellonpää delivers a subtle, yet remarkable performance as the stoic Nikander. Practical yet naive, introverted yet courageous, Nikander is a man full of contradictions, and Matti Pellonpää manages to create a painfully realist portrait of Kaurismäki's perennial underdog. In his deadpan delivery, there's a great sense of honesty that permeates everything he says, and that prevents his performance from looking artificial or rehearsed. As Ilona, Kati Outinen is also a great asset of the film, as with simple gestures and mannerisms, she manages to transmit the great bleakness of Ilona's world, and her the struggle to survive it. The eyes of both Pellonpää and Outinen synthesize the underlying themes in "Varjoja paratiisissa": Nikander's stoicism and Ilona's desperate depression are reflected deeply inside their eyes. Also of notice is Sakari Kuosmanen's highly charismatic performance as Nikander's friend Melartin.

The stylish aesthetic of Kaurismäki's cinema is at the same time its greatest asset and its most difficult problem, as it is certainly an acquired taste. The deadpan delivery and the bleak outlook could easily be taken as dull or tedious, and in fact the slow pacing that Kaurismäki gives to "Varjoja paratiisissa" makes it reach at times a point of boredom. Certainly, Kaurismäki's style was not yet entirely developed at this stage, and this is best reflected in the uneven slowness of its pacing, which can get tiresome. While realist in its approach, the bleakness of its atmosphere may not be that accessible on the first instance, and may take a while to get the black humor that lays underneath its brooding tone. Nevertheless, once one gets past the initial shock, the charm of Kaurismäki's subtle comedy begins to be more notorious as the characters reveal themselves. With its simple story, the heart of the story is in the characters themselves, whom in their big humanity reflect hwo strangely funny can tragedy be.

While far from a masterpiece, "Varjoja paratiisissa" or "Shadows in Paradise", is an important film in Aki Kaurismäki's cinema as it's where his distinctive style began to shine. As part of the Proletariat Trilogy, it introduces the themes that would be better explored in the posterior films ("Ariel" and "Tulitikkutehtaan tyttö"), and while it's brooding, melancholic pacing can be tiring, it offers a Kaurismäki willing to take risks to deliver a more honest work. Flawed, but enormously interesting, "Varjoja paratiisissa" may be a difficult film to like (perhaps Kaurismäki cinema in general is this way), but it's also one that offers a strangely warm joy found in the cold difficulties of life.