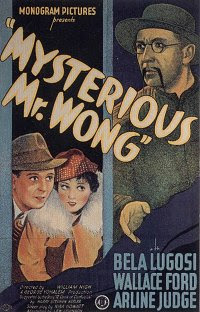 While originally created as the embodiment of the racism towards Asian people that was prevalent when British writer Sax Rohmer wrote about him for the first time, the criminal mastermind Dr. Fu Manchu is nowadays considered as one of the most famous and influential characters in fiction. In the early 30s, several movies about Fu Manchu were very popular, specially the fourth one, 1932's "The Mask of Fu Manchu", which had horror legend Boris Karloff playing the infamous criminal (Swedish actor Warner Oland played Fu Manchu in the first three American movies). While not a success of the proportions of other horror movies of the same period, "The Mask of Fu Manchu" performed very good commercially, and producer George Yohalem at the legendary B movie studio Monogram Pictures decided to make his own thriller with an Asian mastermind played by another horror legend: Bela Lugosi, who in those years was beginning to be type-casted in villainous roles.

A series of mysterious murders begin to take place in San Francisco's Chinatown, in what at first sight looks like a war between rival Tongs, the infamous Chinese American secret societies. Reporter Jason Barton (Wallace Ford), is sent to investigate on the case, but while he also initially believes that this killings are nothing more than a typical clash between mafias, soon he discovers that the truth behind them is far more amazing than what he ever thought, as the clues unveil a mysterious criminal mastermind known only as Wong (Bela Lugosi) as the responsible of the murders. Mr. Wong is looking for the Twelve Coins of Confucius, a mythical set of coins that according to legend, will grant to its owner the power to rule over an ancient Chinese province. Barton will have to solve the mystery behind the identity of Mr. Wong in order to stop him before he finds the twelfth coin.

Written by Lew Levenson and Nina Howatt, "The Mysterious Mr. Wong" is an adaptation of a short story by the then popular detective fiction writer Harry Stephen Keeler, "The Twelve Coins of Confucius", which was included in his "Sing Sing Nights" book (itself adapted to film that very same year). Like many horror and mystery films of those days, "The Mysterious Mr. Wong" follows a wisecracking reporter trying to catch a murderer and solve the case, however, what's interesting about this movie (and Keeler's original story) is that even when the movie was obviously done to cash in the success of "Fu Manchu", the attitude towards the Asian people is completely different, as although the villain is of Asian origin, most of the Asian characters are presented (albeit stereotypically) as wise and cultured people while the American counterparts are racist and ignorant about their culture.

Director William Nigh, famous for his career on B movies, helms "The Mysterious Mr. Wong" with his usual restrained but effective style. While the movie is built like a thriller in the "Fu Manchu" style (sometimes it almost feels like a chapter from a serial), Nigh keeps the movie deeply rooted in its crime fiction origins, and it even has traces of the elements that would evolve in the Film-Noir genre of the 40s. Already used to work with truly limited budgets, director William Nigh packs his movie nicely and makes the most of what he's got, wisely leaving his cast (namely Bela Lugosi and William Ford) to do their thing and drive the film with their talents. Nigh may had been a Poverty Row director, but he knew what worked on his movies and this time his work with the cast was spot on. Sadly, it wouldn't be enough to save a movie with an extremely poor script.

As written above, it is the cast's performances what truly makes the film worthy, as while the script it of a mediocre quality, the three lead actors make a terrific job with what they had in their hands. As our wisecracking hero, Ford is genuinely funny in his delivery of jokes and one-liners, showing that ease with comedy that he had showed before in Browning's "Freaks". Arline Judge plays the romantic interest, but she doesn't limit herself to be a damsel in distress, as she makes her character the real equivalent of Ford's and gives their relationship the dynamics of classic screwball comedy. Finally, Bela Lugosi steals the show as usual in his performance as the ambitious Mr. Wong, playing a malicious and intelligent character with great skill and enthusiasm. It's odd to see him play a Chinese man, but his accent actually works and one wonders how Fu Manchu movie with Bela would had been.

It's a real shame that such great performances get wasted in the movie, as while they make the movie worth a watch, they aren't enough to save the film from its problems, deeply rooted in the awful script built from Keeler's short story. It's true that Harry Stephen Keeler's novels never were really high class literature, but Levenson and Howatt's screenplay make what could had been an exciting mix of horror and thriller to feel slow and average. The main problem is that the movie has a great potential (that gets shown in a couple of scenes), but never truly delivers because it fails to explore what it proposes and everything ends in good ideas that never really were exploited. In all fairness, this may had been caused by their budgetary limitations, as one gets the feeling that the story was cut to make the movie shorter.

While "The Mysterious Mr. Wong" never really reaches its true potential, it's still a fun (albeit average) thriller that benefits a lot from Judge, Ford and specially Lugosi. It's no masterpiece, but despite its limitations, it's a very entertaining film. And by the way, this movie has no relation to the other "Mr. Wong" movies produced later by Monogram, where the character was reworked as a detective in the vein of Charlie Chan.