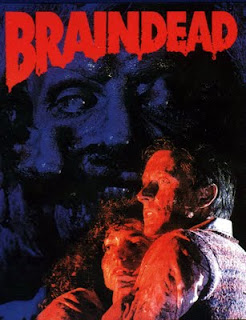 In the early 80s, a passionate young man from New Zealand named Peter Jackson struggled to complete his first independent film, a science fiction story that mixed splatter horror and bizarre comedy. Finally released in 1987 as "Bad Taste", the movie quickly became a cult favourite and revealed Jackson as a promising new talent. He'd follow up "Bad Taste" with an offbeat movie even more bizarre than his debut, "Meet the Feebles", a black comedy starring puppets that further cemented Jackson's reputation as a cult filmmaker. For his third film, Jackson had a go at a more traditional horror storyline: a zombie film. However, his outlandish style and energetic filmmaking took the sub-genre beyond and resulted in one of the most amazing and original zombie films ever made, "Braindead". Released in 1992, "Braindead" (or "Dead Alive" as it was known in the U.S) is a deliriously insane mix of splatter horror and romantic comedy that knows no boundaries when it comes to gore. Peter Jackson's first bloody masterpiece.

Set in Wellington, New Zealand, during the summer of 1957, "Braindead" tells the story of Lionel Cosgrove (Timothy Balme), a young man who has spent most of his life under the oppressive control of his domineering mother Vera (Elizabeth Moody). One day, Lionel meets the shopkeeper's beautiful daughter Paquita (Diana Peñalver), whom is convinced that Lionel is her one true love that the Tarot cards prophesied. Feeling attracted to her, Lionel ends up having a date with her at the Zoo. His mother follows them but she is accidentally bitten by the highly aggressive Sumatran Rat Monkey, a strange creature from the legendary Skull Island. The accident disrupts Lionel's date and, to Vera's pleasure, he decides to take care of his mother's wound. However, her recovery is not exactly successful and the poisonous bite of the creature turns Vera into a flesh-eating zombie. Lionel, determined to take care of his mother, locks her in the basement, but all hell's break loose when she begins to devour their neighbors.

Written by Jackson and regular collaborators Fran Walsh and Stephen Sinclair, "Braindead" is a darkly humorous take on the zombie genre that balances perfectly the slapstick comedy and the splatter horror. Jackson and company have crafted in "Braindead" a highly inventive storyline that keeps getting more and more outlandish as it develops, and yet manages to remain coherent in both its tone and style, without getting ridiculous or tedious (quite a feat given its theme). They certainly never miss a chance to go over-the-top, but the playful, whimsical tone the story allows such excesses. Interestingly, the characters are very well defined, and behind the gallons of blood and the dismembered body parts, there is a well developed complexity in the relationship between Lionel, his mom and Paquita. The core conflict of the film being not just to survive the zombie rampage, but Lionel's fight to be free from his mother. However, the most remarkable thing about "Braindead" is simply how genuinely funny it is.

And a lot of credit for this must go to Jackson's work of direction, which showcases a great comedic timing and a pretty good knowledge of how to develop his plot. While "Braindead" is not the first film to have over-the-top comic-book violence as source of laughs, however, Jackson does it with intelligence, embracing the camp and the absurd outrageousness of the story without taking it too seriously. Bizarre and subversive, yet full of a charming naiveté, "Braindead" is a wild roller-coaster ride of non-stop laughs and gore. Cinematographer Murray Milne showcases a highly dynamic camera-work that truly makes the most of its haunting location: the Cosgroves' old mansion. A lot of credit must go to Richard Taylor (later founder of Weta Workshops) and his special effects team, who create a remarkably outstanding piece of work, specially considering the relatively low budget of the production. The highly imaginative set pieces that Jackson creates would not be the same without the work of both Milne and Taylor.

Regarding the cast, the performances are of great quality, and the actors really make a great job with the screenplay. In his feature film debut, Timothy Balme is great as the shy, and socially awkward Lionel Cosgrove, the unlikely hero of this story. With a everyman look and natural charm, Balme is perfectly believable both as a dedicated son and as zombie killing machine. Balme also displays a terrific talent for slapstick comedy through the film, specially in a scene involving a park and a baby cart. The beautiful Spanish actress Diana Peñalver makes a fitting romantic interest for Lionel, playing the high spirited Paquita with a joy and energy that contrasts nicely with the bumbling character developed by Balme. Elizabeth Moody plays Vera, and she does it with such a great passion and power in her delivery that is difficult not to hate her character. Nevertheless, actors Ian Watkin and Stuart Devenie are definitely the scene stealers of the film; Watkin, as the despicable uncle trying to get Lionel's money, and Devenie, in a small but very memorable scene as the town's priest.

Peter Jackson's "Braindead" has earned a reputation as one of the goriest films of all time. While the movie certainly makes a good argument for the title, what makes the difference between "Braindead" and other gory horror films may be the fact that despite the looks, it's not really gratuitous. It's not gore for gore's sake, but the actual use of guts and blood for slapstick. Like Sam Raimi did in "Evil Dead 2", the gore in excess is taken as another element of absurd in the manner of grand guignol theater. Things that could be labeled as gross, sick or disgusting, become the source of comedy under Jackson's narrative, which seems to be trying to outdo itself in terms of outrageousness each time (and boy it succeeds!). The macabre humor of Peter Jackson may be hard to stomach at first, but in "Braindead" he achieves a balance between mainstream accessibility and his trademark taste for the bizarre. And the most amazing thing is that after all the guts and gore, there's a charming love story that works swiftly hidden beneath the blood.

Years later, Jackson become a well-known name thanks to the strong drama film "Heavenly Creatures" and of course, his magnum opus, the adaptation of J.R.R. Tolkien's fantasy novel "The Lord of the Rings". However, for many horror fans he was already a major talent to follow way before his mainstream breakthrough, being the mastermind behind three splatter cult classics where low budget was in no way a limit for a fertile imagination. Despite being lesser known that "The Lord of the Rings" trilogy, "Bad Taste", "Meet the Feebles" and "Braindead" remain an early trilogy of offbeat horror and comedy that still can deliver its good share of laughs, and showcase the rising talent of Peter Jackson. Of the three, "Braindead" is without a doubt, the crowning achievement. And one hell of a bloody crowning achievement!