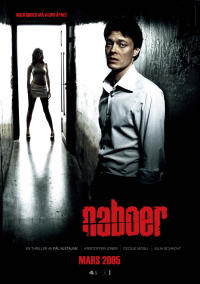 From time to time, the really cool website Cult Reviews invites me to contribute the site with a review, and once again I have written a piece that just recently got published there; this time for "Naboer" (2005), director Pål Sletaune's contribution to the horror filmography of his native Norway. Keeping up the good work in their dedication to the weird, the strange and the shocking of cinema, chief reviewers Vomitron and Perfesser Deviant continue bringing up reviews, interviews and information about the beloved horror genre, making Cult Reviews the site to go to satisfy that interest on the dark side of cinema. As for "Naboer", it's a terrific example of the new generation of Norwegian horror, in which director Sletaune has crafted a claustrophobic, suffocating atmosphere inside an apartment where bizarre things happen. If your first though was "Polanski" then you are on the right track about the kind of horror Sletaune attempts in "Naboer", though on a decidedly more sexual vein. To know more on it, check out the post at Cult Reviews.

Like my previous contribution, "Due Occhi Diabolici", this review of "Naboer" is part of a series of posts dedicated to the Mr. Horror Presents DVD collection. Known as the foremost horror guru of The Netherlands and Belgium, Jan Doense has built up his reputation as a horror film critic due to his constant work supporting horror filmmaking. Par tof this efforts have been the Amsterdam Fantastic Film Festival (formerly The Weekend of Terror) for example. In his “Mr. Horror Presents” label, Doense releases on DVD a collection of his personal recommendations, modern horror classics that had no previous release on the Benelux countries, but that definitely deserve a watch. In my personal opinion, this effort is quite worth of recognition, as while one may agree or disagree with Doense's opinions, it's great for the fans to be able to acquire some of those films. At Cult Reviews, severeal of the movies of the collection have been reviewed recently, like Jeff Lieberman's "Blue Sunshine", his more recent "Satan's Little Helper", and Scott Spiegel's "Intruder". For a complete of reviews on Mr. Horror releases check here.

On the greater scheme of things, Perfesser Deviant has written reviews of Conor MacMahon's "Dead Meat" and Tripp Reid's "Manticore"; while Marco Freitas has published an interview with filmmaker Michael Schroeder. Finally, Vomitro himself has chronicled his encounter with the bizarre "Dracula Vs. Frankenstein". More of the good stuff can be found at your favourite site on the weird and the strange of cinema Cult Reviews.