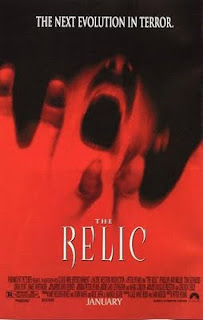 Authors Douglas Preston and Lincoln Child found the perfect niche for their collaborative writing in the techno-thriller genre, novels where a vast amount of technical detail is important part of the prose. Amongst their work, the series of novels with Agent Pendergast have proved to be their most popular, with eleven published novels to date. "Relic", the first of the series, became a bestseller very quickly, and naturally, negotiation began for a movie adaptation with director Peter Hyams at the helm. Hyams at the time had gone from making several science fiction movies ("Capricorn One", "Outland" and "2010"), to direct several thrillers in the 80s and 90s, including two action films with Belgian actor Jean-Claude Van Damme in the 90s ("Timecop" and "Sudden Death"). "The Relic", as the film was retitled, was released in 1997 (two years after the book), and while several major changes took place from novel to film (Pendergast is omitted entirely to begin with), the resulting horror film was not really bad.

"The Relic" begins when an strangely abandoned ship arrives on the Illinoins River. Chicago PD homicide detective Vincent D'Agosta (Tom Sizemore) is sent to investigate the ship, which contained cargo for the Museum of Natural History in Chicago. Looking for the missing crew, D'Agosta finds their severed heads in the bilge hatch. At the Museum, Dr. Margo Green (Penelope Ann Miller) examines the cargo sent and only finds a statue of the mythical beast Kothoga. When a security guard is murdered in the same gruesome manner as the ship's crew, Detective D'Agosta suspects that there may be a link to the crime at the ship. The Museum is planning a gala opening for its latest exhibition, "Superstition", so it's on its best interest that D'Agosta's investigation ends soon. The police finds and kills a deranged homeless man hiding in the basement and the case is considered closed. However, D'Agosta is not convinced of this, and takes his men for a final search through the basement, when they are attacked by an enormous monster: Kothoga.

Preston and Child's novel was adapted to the screen by a team of scriptwriters consisting of Amy Holden Jones, John Raffo, Rick Jaffa, and Amanda Silver. Moving away from its techno-thriller roots, "The Relic" film version takes a decidedly more straightforward horror approach: it is a creature feature in the most classic style, with a monster roaming free and hunting a group trapped in a dark and sealed location, in this case, the halls of the Museum of Natural History. "The Relic" is certainly very traditional in its approach to this formula, perhaps too traditional for its own good; however, the little details and ideas that "dress" the plot are what keep things fresh and interesting, and almost make up for the lack of originality in its formula. The Museum by night is a wonderful setting for a monster movie, and the creature mythology and origins are a nice twist as well. Character development is kept at a pretty basic level, though Detective D'Agosta has interesting bits when his extreme superstitiousness faces the Museum's "Supersition"'s exhibit.

However, while the plot may be formulaic, director Peter Hyams plays with it to his favor and builds up in "The Relic" an effectively atmospheric film that takes full advantage of its setting to deliver a simple but entertaining monster movie. As expected, Hyams is also the cinematographer of the film, and while his work in this field is often labeled as poorly lit, his style actually works favorably for the kind of horror he attempts in "The Relic". His low-key lighting enhances the ominous atmosphere of the Museum, and increases the tension and suspense by having the monster Kothoga lurking in the dark for the most part of the film (traces of Ridley Scott's "Alien" can be felt). An effective craftsman, Hyams creates a couple of pretty interesting set pieces in which this terror of what lurks in the shadows is exploited to good effect and elevate the film from the rest. "The Relic" is also a tad gorier than other mainstream horror films of the same period, an element that along the dark cinematography give the film a nice grizzly style.

Leading the cast is Tom Siezemore as Detective Vincent D'Agosta, playing a superstitious yet hard-working detective, basically an extension of the tough guy persona that Sizemore had been built through the 90s. in "The Relic" Sizemore delivers a good, effective performance, believable and natural though to be fair, without showing anything really outstanding. However, Sizemore manages to carry the weight of the film with strength. As his counterpart, Penelope Ann Miller is a bit less successful, as while her performance is not particularly bad, she seems just average, sleepwalking through her role as if she preferred to be somewhere else. Granted, a lot of this may be the result of the sad fact that their roles are pretty much the typical stock characters of the modern monster movie, so there's the tough guy who must face his secret fears and the sexy scientist who must put up a good fight with the monster. The rest of the characters are also of the classic variety of supporting characters that make up good victims for mythical beasts so, nothing truly new here.

Certainly, the apparent lack of originality in "The Relic" basic elements make it sound like a typical B-movie with relatively known actors, and clichéd situations. However, as written above, the little details are what make "The Relic" to rise from the norm and deliver good entertainment. Hyams crafts his movie with a deeply somber seriousness: there is no place for cheesy humor, juvenile roles or witty postmodern references; "The Relic" may be nothing more than a simple creature feature, but it takes its subject seriously, and with as much realism as its fantastic roots allow it to have (perhaps an inherited trait from its techno-thriller origins). This approach works nicely with the grizzly gore and Hyam's dark cinematography, giving the film an atmosphere akin to a descent into a Lovecraftian nightmare. And this is maybe why Hyams' faithfulness to the monster movie formula actually works in "The Relic": the built-up atmosphere is so effective that a move away from the expected may feel like a betrayal to the genre.

American columnist William Safire recommended that one should avoid clichés like the plague, however, and specially when working within a defined genre, sometimes clichés are what work best. The secret being not what happens, but how it happens. In "The Relic", director Peter Hyams takes a clichéd storyline and delivers a well-crafted tale of horror that, while certainly will not change the face of the horror genre, at least delivers its fair share of scares and entertainment. And sometimes that's all that's needed. While perhaps of little resemblance to Child and Preston's techno-thriller, "The Relic" is definitely one of the better monster movies that came out in the 90s. Dark, creepy and ominous, "The Relic" is an underrated minor gem, and a highlight in Peter Hyams' uneven career.