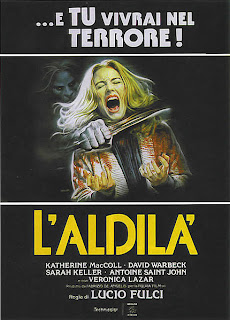 After making himself a career directing comedies, spaghetti westerns and giallos, Italian director Lucio Fulci finally achieved worldwide recognition in 1979 with "Zombi 2", his very own take on the then popular zombie subgenre (the "2" of the title being the result of it being marketed as a sequel to Romero's 1978 horror classic "Dawn of the Dead"). Fulci would return to the horror genre the following year with the violent "Paura Nella Città Dei Morti Viventi" ("City of the Living Dead"), where he would use the zombie subgenre to explore metaphysical concepts such as Hell and the after life in a vein closer to surrealism in film. What Fulci started in "City of the Living Dead" would be further expanded in his follow-up, "L'aldilà" ("The Beyond"), the second film in the so-called "Gates of Hell" thematic trilogy ("Quella villa accanto al cimitero" or "House by the Cemetery" would be the third one). Amongs Fulci's varied filmography, "L'aldilà" has achieved cult status and is often considered to be his masterpiece. And not without a reason.

The story begins in Louisiana, 1927, where an enraged mob gathers outside the Seven Doors Hotel decided to lynch an artist named Schewick (Antoine Saint-John), as he is being accused of practicing witchcraft. Schewick is brutally crucified and as a result, one of the Seven Doors of Hell is opened. The doors connect the world of the dead with the world of the living so, the townspeople decide to seal the basement in the hope of keeping the evil forces trapped inside. 54 years after Schewick's death, a young woman named Liza (Catriona MacColl) arrives from New York after inheriting the Seven Doors hotel. Liza has plans to reopen the hotel for business, but her renovation works reactivate the portal to Hell and soon strange accidents begin to take place. Dr. John McCabe (David Warbeck) arrives to the scene to help an injured worker and becomes friends with Liza. Both of them will have to face the evil force that has crossed the portal, and their only help comes from a strange blind woman (Sarah Keller) who seems to know a lot about what's going on.

Based on a story by famed Italian writer Dardano Sacchetti (Fulci's regular collaborator, and a man who wrote scripts for many of the important Italian horror filmmakers during the 70s and 80s) and adapted to the screen by Giorgio Mariuzzo, Lucio Fulci and Sacchetti himself, "L'aldilà" is a nightmarish story of supernatural horror that, while initially looking like a typical horror film, it soon moves further into the oneiric realm as the story unfolds. Highly symbolic and surreal, the storyline is diffuse, almost non-linear, more interested in the effect of its visual imagery than on having a traditional narrative. The overall effect is akin to experiencing a nightmare, where logic is less important than the atmosphere and symbolism transmitted through its images. The zombie film is used just as basis for what is a dark meditation on the afterworld. It's certainly a highly ambitious and risky idea, but Fulci and Sacchetti craft a powerful story that, while probably incoherent at first sight, truly transmits the feeling of being a nightmare put on film.

While in "L'aldilà" director Lucio Fulci moves to more metaphysical concepts thematically, stylistically he remains faithful to the same carefully detailed gore he had showed before. However, in "L'aldilà" he takes his penchant for violent gore to a higher artistic level, resulting in creative set pieces that are not only disturbing and horrifying, but also owners of a strange ethereal beauty. Despite the obvious low-budget the film had, Germano Natali's special effects are for the most part pretty effective (though a scene involving spiders is particularly poor). "L'aldilà" is also benefited by a very good work of cinematography by Sergio Salvati (another of Fulci's regular collaborators), who truly captures an ominous atmosphere of dread and enhances the sensation of being watching a nightmare come true. Fulci's narrative is, like the screenplay, more symbolic than linear, and so it may initially seem disjointed. Nevertheless, there is a strong artistic vision that gives coherence to the story as an atmospheric tale of horror.

Certainly, one of the weakest elements in "L'aldilà" is the acting, which is not really the best that can found in Italian horror. To make things worse, the work of dubbing (common in Italian films of the period) done in the film is terrible, and makes the actors sound even worse than they probably did originally. Nevertheless, it's worth to point out that British actress Catriona MacColl delivers a fairly good performance as Liza, the main character, and really keeps the film on float despite the mess the dubbing is (MacColl appears in the three "Gates of Hell" film). Italian actress Ciniza Monreale also does a good job, playing the mysterious blind woman Emily. While the dubbing does damage their performances, it's safe to say that both are really good in their characters, and deliver the best performances of the move. Sadly, the same can't be said of actor David Warbeck, who comes up as bland and uneven. In fact, Al Cliver (a familiar name in Italian horror) makes a better and more charismatic performance despite having a small role.

"L'aldilà" received a quite cold reception when it was initially released in the U.S. in 1983 (two years after its European premiere), but this can be adjudicated to the fact that it arrived with an awful dubbing, a different musical score and heavily censored (in a version titled "Seven Doors of Death"), all in all resulting in a much different movie than what Fulci intended. While certainly "L'aldilà" is not exactly without its flaws, it's a bold supernatural horror movie that attempts to go beyond the typical clichés of its genre and succeeds in creating a highly atmospheric experience. Perhaps its most difficult trait is the deliberately elliptical narrative, which may appear as loose at best and illogical at worst. However, the diverse holes in the narrative symbolize the bending of logic and reality as the supernatural forces begin to affect the normal world. As written above, "L'aldilà" is built following the logic of a nightmare: the narrative patterned in symbols instead of in a chained sequence of events.

While probably a difficult film given its loose structure and ambitious storyline, "L'aldilà" is a quite rewarding horror film thanks to its ominous atmosphere and it's cleverly conceived graphic gory sequences. All the elements that are part of Fulci's style appear at its best in the movie, and it wouldn't be exaggerated to call "L'aldilà" as the epitome of his highly idiosyncratic vision of horror. Certainly the strange and atypical way the plot is structured may turn off some viewers, but once one gets captured by its nightmarish surreal beauty, "L'aldilà" is a powerful oneiric experience. "L'aldilà", or "The Beyond", is a terrific masterpiece of horror that fans of the genre should not miss. It's really a beautiful, haunting and influential example of metaphysical horror.

I do love The Beyond and also have a soft spot for the excellent City Of The Living Dead AKA Gates Of Hell. Fulci can be a bit hit and miss, in my experience, but he can pile on the atmosphere with a shovel like few others.
P.S. I love the reviews here, I just keep forgetting to check in. Apologies.

Hi Kev! I haven't seen "City of the Living Hell" yet, but hopefully that will happen soon! Which Fulci films would you say are NOT recommended?