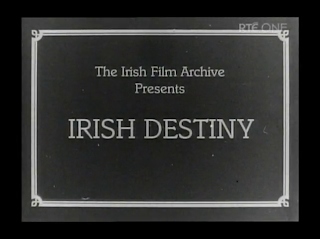 In 1916, a group of Irish republicans mounted an insurrection with the goal of ending centuries of British rule over Ireland and the creation of an independent Irish Republic. The Easter Rising, as it came to be known, was quickly suppressed but its influence was enormously significant: it became the seed for the declaration of Independence in 1919 and the subsequent war against the United Kingdome of Great Britain. The Irish War of Independence lasted from 1919 to 1922, and resulted in the separation of Ireland from the United Kingdom and the instauration of the Republic of Ireland. Naturally, the Irish War of Independence became an important theme for the arts of the new republic, and cinema was not the exception. While the war took its toll in the nascent Irish film industry, the year of 1926 saw the release of the first film inspired by the war of independence: George Dewhurst's "Irish Destiny". Considered lost for many years, the film was rediscovered in 1991, offering a glimpse of the Republic of Ireland's early years.

With the Irish War of Independence as background, "Irish Destiny" is the tale of Denis O'Hara (Paddy Dunne Cullinan), a young man leading a normal life in a small Irish town. Denis is in love with the Moira Barry (Frances Macnamarra), who is the town's teacher. However, he is also aware of the situation of his country so, when given the chance, Denis decides to join the Irish Republican Army in the war of independence. As a member of a group of Irish Volunteers, Denis fights under the orders of Captain Kelly (Kit O'Malley) against the British Army branch known as the Black & Tans. The discovery of plans for a raid at the IRA headquarters, prompts Captain Kelly to send Denis to Dublin and warn the heads of the movement. So, Denis rushes to Dublin in order to fulfill his mission, but in the meantime, the villainous Gilbert Beecher (Brian Magowan) begins to court Moira. To complicate things, Denis gets shot by the Black & Tans, and ends up wounded at a Dublin's hospital. Everyone at home now believes him death, much to the dismay of his mother (Daisy Campbell) and Moira.

Written and produced by Isaac J. Eppel, "Irish Destiny" is at its core, a pretty basic melodrama of romance and heroism during wartime, designed to exalt the ideals of the war of Independence and the values of Irish people (in which of course rests the Irish destiny). Denis, an everyman representing the promising Irish youth, decides to put duty to his country as his main priority and risks his life and happiness in order to do the right thing. While this may sound like bordering propaganda, Eppel's story never tries to be anything more than a harmless tale of romance and adventure. In fact, this unwillingness to go further is actually a problem of the screenplay of "Irish Destiny", as it feels too archaic, even for its time. Interestingly, the British army is not really demonized, and it could even be argued that they receive a fair treatment. The true villains in Denis' life are actually fellow Irishmen: Beecher and his gang of poteen-makers, whom indifferent to the cause, just take advantage of the situation for their own benefit.

Directed by British filmmaker George Dewhurst (who would direct the very first version of "Sweeney Todd" that same year), "Irish Destiny" is particularly notable because of one single reason: the use of real footage from the burnings of Cork in 1920, and of the Customs House in 1921. While narratively those events are only referred to set the historical time-frame of the film, the images shown work as a time capsule from Dublin during the war, and are of invaluable for historical reasons. Also of great interest are the vistas of Dublin that Dewhurst and cinematographer Joe Rosenthal capture, specially during Denis' arrival to the city: a series of scenes following Denis riding a motorcycle through Dublin's streets, where Trinity College and St. Stephen's Greens can be spotted. Other than that, Dewhurst's film is pretty traditional in its approach to melodrama, and does little to improve its simplistic screenplay. Though there are some interesting ideas scattered through the film, for the most part the narrative is sloppy and static.

Acting in "Irish Destiny" is a mixed bag: though there are pretty good performances in the film, there are some that are not that lucky, and amongst them is unfortunately the one from the film's protagonist, Paddy Dunne Cullinan. As Denis, Cullinan looks wooden and stiff, and his emotional range is pretty limited. While he looks the part of the hero, his acting leaves a lot to be desired, and this severely compromises the film's success. As her love interest, Frances Macnamarra is slightly better, not much of an improvement though she certainly looks more natural than her stiff counterpart. A better performance is the one given by Brian Magowan, as the vicious Beecher. While his role is certainly one-dimensional, Magowan adds a lot of personality to his character with his facial gestures. It's not difficult to buy him as a sly and treacherous fella. In the supporting roles, Kit O'Malley and Evelyn Henchey are remarkably good. Henchey in particular is a much more natural and attractive presence in the film than Macnamarra.

Probably the main problem of "Irish Destiny" is how simple it is, and this is taking into account its release date. While by 1926 silent cinema had reached the peak of its art, George Dewhurst's war melodrama feels as a movie 10 years older than its true age, from a time where cinema's language was still in development. Static and terribly stage-bound, its narrative is pretty conventional to the point of being dull. Though as written above, a lot of the blame must go to the Eppel's screenplay, which follows the pretty basic pattern of American's early adventure films, complete with the last minute rescue. Character development is minimal, as they remain the classic archetypes of adventure films: good looking hero, damsel in distress, and treacherous villain. Perhaps more care while developing the story would had improved the results, as the film is not entirely without redeeming qualities. Unfortunately, those good ideas are lost in a movie that even for 1926 can't help but feeling dated and a tad archaic.

Invaluable as a historical record of Ireland's history, yet marred by an unsophisticated and crude narrative, George Dewhurst's "Irish Destiny" is a difficult film to judge. On one hand it's filled with some amazing shots of 1920s Dublin (not to mention its use of historical footage), yet on the other its stylistic problems are undeniable. In the end, the best recommendation would be to approach this piece of Irish history with an open mind, and expect, perhaps not a classic masterpiece of cinema, but a window to a turning point in the history of Ireland. While as a war melodrama it may fall flat, as a time-capsule and a memory of the city of Dublin, "Irish Destiny" is a magnificent piece of work. For all the movie's flaws, the image of Denis riding through Grafton street in his motorbike has an undeniably haunting beauty.