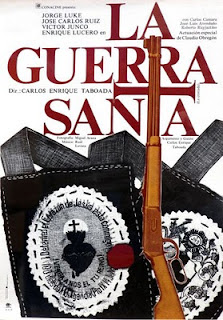 The Cristero War (or Cristiada) was a conflict that took place from 1926 to 1929, in which Roman Catholics formed an uprising against the Mexican government of President Calles, due to his enforcement of the anticlerical laws. What began with peaceful resistance, soon became a formal rebellion in 1927, and the rebels (known as Cristeros army and formed mainly by rural inhabitants), with the support of the Mexican bishops, began to pose a serious threat to civil order. Peace would only come with the ending of Calles' term as president, and despite grave difficulties (such as the assassination of president-elect Álvaro Obregón by a Catholic radical), an arrangement was reached with he Church and finally the Cristero War ended. The Cristero War left a profound impact in Mexico, as a Civil War in which Mexicans fought against each other instigated by religion. It certainly left a deep sentiment of indignation in filmmaker Carlos Enrique Taboada, as he would portray his vision on the conflict in one of his most accomplished films: 1979's "La Guerra Santa".

"La Guerra Santa" ("The Holy War") chronicles the story of Celso Domínguez (José Carlos Ruiz), a shy and cowardly inhabitant of the poor town of Rincón del Cobre. It all begins when the town's priest, Father Miguel (Víctor Junco), informs at mass that he will close the Church's doors and stop giving mass until the Calles' law is abolished. Father Miguel begins to manipulate the panicked population, convincing the men to join the Cristeros, the rebel army of Catholic loyalists. Celso is afraid of death and doesn't want to go, but seeing how the town begins to shun him, he reluctantly joins the army. Celso enters under the command of Colonel Ursino Valdez (Jorge Luke), a skillful strategist who believes fanatically in his mission and follows the advise of Father Soler (Carlos Cámara). In Ursino's army, Celso will be forced to fight and to kill, joining them in their ventures. The humble peasant will discover the horrors of war and the atrocities committed by both sides in the fratricidal war later known as the Cristero War.

Based on his own research on the subject, "La Guerra Santa" was written by director Carlos Enrique Taboada himself, who took the film as his most personal project. Bleak and full of hopelessness, "La Guerra Santa" is a story about an innocent and calm man being dehumanized and degenerated by the horrors of war. A symbol of the everyman, Celso expresses constantly his unwillingness to join the Cristeros, but does it out of peer pressure. Following the words of the priests, the Cristeros completely believe that their cause is right, and that everything done for the cause is good. However, under the fanatical leadership of Colonel Ursino, soon this "everything" includes raping and pillaging as well. Outspoken about his own anticlerical ideology, Taboada makes no secret about whose side he is on, and portrays the peasant army as the victims of the priests' manipulations who take advantage of their fears and ignorance. Taboada's thesis is that war is always hell, even those justified as "holy". Or better said, specially those justified as holy.

Director Carlos Enrique Taboada translates nicely the bleak tone of his screenplay and makes Celso's descent to hell a visually arresting anti-epic, in which the desert rural landscape reflects the abandon and solitude of the Cristero army. The war is experienced through Celso's eyes, and through him Taboada introduces a series of interesting characters that reflect his pessimism about humanity: the cruel and fanatical Colonel Ursino, the cold and ambitious Father Soler, Celso's amoral friend Jacinto, each one of them enters the conflict with the mission of fighting for God, but Taboada makes clear that God, if exists, has seemingly abandoned his army. A particularly moving scene between Celso and a captured atheist schoolteacher (Claudio Obregón) becomes the focal point in which Taboada centers his vision. Certainly, the film lacks subtlety in its approach and makes no concessions about its ideology, however, Taboada succeeds in crafting a moving portrait of a nation manipulated by its political and religious leaders.

The work done by the cast in "La Guerra Santa" is mostly remarkable, with José Carlos Ruiz delivering the best performance in his career. Certainly, there are moments in which Ruiz overacts a bit, though for the most part his delivery as Celso is of great quality, and his transformation very vivid and haunting. It's remarkable how subtle the change from shy villager to soldier of God is, as Celso looks the same, but something is just different. Equally remarkable is the work of Jorge Luke as the violent colonel Ursino. Luke perfectly portrays the fanatical side of his character without going going for the stereotype. The ruthless colonel is a fanatical, but he is not a caricature, on the contrary, he's vividly dangerous because of how natural Luke's performance is. As Father Soler, Carlos Cámara is pretty effective with his stoic and dignified look, which balances the wilder nature of Luke's Ursino. Nevertheless, Cámara's character is also flawed, and the subtlety of the actor makes the character multidimensional.

Not everyone in the cast is as good as Ruiz and Luke, and some are particularly bad (Roberto Ruy for example), though for the most part is one of the best casts that ever appeared in a Taboada film. In fact, "La Guerra Santa" showcases Taboada's talents at their best, with pretty good use of Miguel Araña's cinematography (which is not exactly special, but does the job right) and his great sense of rhythm resulting in a quite fluid storytelling. As written above, Taboada's film has the subtlety of a sledgehammer, but despite its lack of objectivity, in this ambitious anti-epic Taboada manages to avoid any degree of cheap sentimentalism. It is a tale of defeated people, but it's far from condescending with them. Perhaps its major flaw is once again, a Taboada too enamored with his screenplay to cut it, as there are a couple of vignettes in this war tale that seem either unnecessary or too long. Nevertheless, it's hard to deny that "La Guerra Santa" is one of Taboada's greatest achievements.

To the general public, director Carlos Enrique Taboada is better known as the mastermind behind four classics of Mexican horror: "Hasta el viento tiene miedo" (1968), "El Libro de Piedra" (1969), "Más negro que la noche" (1975) and "Veneno para las Hadas "(1984), his famous horror cycle. And this is not without a reason, as the rest of his varied filmography lacked the spirit and energy of his horror films. The great exception is "La Guerra Santa", an anti-war film in which Taboada was able to fully express his idiosyncrasies regarding religion openly. And this perhaps proves a common trait in Taboada's filmography: the quality of his effort depended on how involved the director felt about the project; and in the case of "La Guerra Santa", that was a lot. "La Guerra Santa" is an unfairly forgotten war film that's not only one of Taboada's best, but one of the best war films in Mexican cinema by its own right.