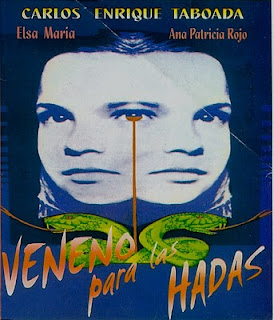 One of the most prominent filmmakers in Mexican horror cinema is without a doubt Carlos Enrique Taboada, who thanks to four famous Gothic horror films cemented a reputation as a master of horror. Taboada's body of work extended to other genres, though most of them were less fortunate than his horror output (a notable exception being "La Guerra Santa"). "Veneno para las hadas", released in 1984, is not only the last film in Taboada's Gothic horror cycle, it was also the last film of his career. Unfortunately, it's the less known as well, mainly because it's more than a bit different to his other horror films, being an offbeat story about witchcraft told from the point of view of a child. After a five year hiatus after 1979's "La Guerra Santa", director Carlos Enrique Taboada returned to horror genre with "Veneno para las hadas" (known in English as "Poison for the faeries" and occasionally with the less inspiring title of "The Evil Faeries"), a strong drama with horror elements that closes the career of one of the most important figures in Mexican horror cinema.

Set in the late 50s, "Veneno para las Hadas" is the story of the strange friendship between two little girls. Flavia (Elsa María Gutiérrez) is the daughter of a very wealthy family who have just moved to the city, and in her first day of school becomes good friends with Verónica (Ana Patricia Rojo), a very smart and manipulative girl who is fascinated with witchcraft and claims to be a witch herself. An orphan living with her old grandmother, Verónica spends most of her time under the care of her nanny (Carmen Stein), who tells her stories about witches and magic. These stories find a fertile ground in Verónica's enormous imagination, and she begins to be deeply interested in becoming the most evil witch ever. Flavia, being more innocent and gullible, begins to believe Verónica's claims, specially as strange events start to happen around them. What at first began as an innocent friendship soon becomes a nightmare as Flavia is tortured psychologically by the possessive Verónica and her threats of using her witchcraft against her.

Written by Carlos Enrique Taboada himself (as usual), the film moves far away from the blatantly supernatural horror of his more famous films ("Hasta el Viento Tiene Miedo", "El Libro De Piedra" and "Más Negro Que la Noche") and focuses on a subtler and slightly more realistic kind of horror. In this aspect, it could be closer to his other offbeat horror film, "Vagabundo en la Lluvia", but the tone is completely different, as fantasy plays a big role in the story. In a sense, "Veneno para las hadas" brings back the theme of corruption of childhood found in "El Libro de Piedra" and gives it another turn of the screw. Now the darkness does not come from the ghost of a boy, but from a very alive girl. And then, Verónica is not entirely developed as a villainous evil child, but as a complex portrait of a troubled girl. The story unfolds at a very slow pace (at times too slow for its own sake), but it carefully develops the bond between the two girls and the morbid details of their bizarre relationship.

The most notorious feature in "Veneno para las hadas" is certainly the fact that director Carlos Enrique Taboada shots his film entirely from the children's point of view, even to the point of having the adult actors being shot from a child's perspective (Their faces rarely appear at all). This style, while certainly a bit gimmicky, allows a greater emphasis on the two main characters, and actually reflects the reality of their lives in relation with the adult world. While different, both girls share the loneliness of being outsiders in their families: Verónica's grandmother is too old to take care of her, while Flavia's parents are cold and even emotionally distant. The cinematography, by Lupe García, is kind of average but Taboada manages to put it to a very good use in creating haunting Gothic images that once again show a strong influence from Italian filmmakers. In this twisted ode to childhood, Taboada succeeds in crafting a fairy tale for adults that's all the more disturbing in its bleak realism.

Given that the film focuses on only two characters their performances are vital for the success of the film, and while certainly not entirely amazing, the overall result is quite positive. As the manipulative Verónica, Ana Patricia Rojo is an absolute joy to watch, as with great talent she can be both adorable and hateful at the same time. Despite her young age, her performance is remarkable in the complex role of the little girl who claims to be a witch, and it's easily the film's greatest asset. Unfortunately, Elsa María Gutiérrez as Flavia is a lot less fortunate, seeming at times a bit wooden and unprepared. Nevertheless, there are also moments of quite believable realism when her innocence is truthfully transmitted to the screen. As written above, the adult roles are for the most part minor and many times reduced to voice acting. While the work is effective for the most part, sometimes the dubbing is not entirely good, sounding a bit artificial and staged.

Taboada's final Gothic horror film is certainly a quite different kind of beast than his other Gothic set pieces, which could feel initially like a disappointment. It remains decidedly Gothic in atmosphere, yet follows a different kind of horror, subtler than in his previous films, yet somehow more disturbing. A horror that comes not from beyond the grave, but from the logical and inevitable consequences of people's actions (again, in a similar vein as "Vagabundo en la Lluvia"). Unfortunately, "Veneno para las hadas" is marred by an average work of cinematography and a terribly slow pace, which prevent the film from truly being flawless. Lupe García, a veteran camera operator, creates pretty bland images, that are only saved by Taboada's slick sense of visual narrative. However, the slow pace the movie has is probably what hurts the film the most, as at times it makes it drag a bit too much for its good, and gives the film a tone closer to television melodrama than to horror cinema.

Despite its flaws, "Veneno para las hadas" remains as one of director Carlos Enrique Taboada most original and captivating films, offering a profoundly bleak fairy tale for adults. While nowhere near as famous as "Hasta el Viento Tiene Miedo", and definitely not as polished as his Gothic masterpiece "El Libro De Piedra", this little gem is still a pretty good, albeit different, entry in the Gothic horror genre. While it was well received by audiences and critics, Taboada never made again a film after "Veneno para las hadas", and focused his career on television. A thematic conjunction of Taboada's usual themes and obsessions, "Veneno para las hadas" is truly a fitting closure to a great director's career.