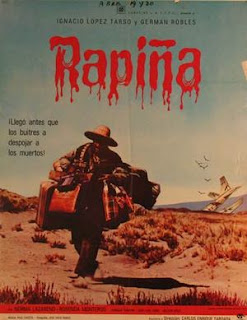 In 1968, Mexican screenwriter turned director Carlos Enrique Taboada earned cult status with the release of a Gothic horror film that quickly became a classic of the genre, "Hasta el viento tiene miedo". The following year's "El Libro de Piedra" had the same luck and cemented Taboada's popularity as a horror filmmaker, but during the 70s, Taboada abandoned horror and began to explore different genres, crafting a series of low budget thrillers during the first half of the decade, in a decidedly more commercial vein. However, thanks to governmental support, Taboada would be able to return to a more personal style of filmmaking. During the seventies, the Mexican government began to have a greater interest in cinema, and decided to generate new ways to support Mexican filmmakers. One of these ways was the creation of Conacine in 1974, a governmental institution that helped the production of new Mexican cinema. With the support of Conacine, Carlos Enrique Taboada crafted a more ambitious story: 1975's "Rapiña".

"Rapiña" (literally "Rapine"), is the story of two humble woodcutters, Porfirio (Ignacio López Tarso) and Ebodio (Germán Robles), who live in a poor community located deep in the high Mexican mountains. One day Porfirio visits the town doctor (Enrique Pontón), and while waiting, he overhears the doctor complaining about his life in the rural community, and his longing for a more "civilized" work. Porfirio feels upset about it, and decides to do whatever he can to move away from his town and become "civilized". His wife Rita (Norma Lazareno) tries to comfort him, but Porfirio is restless about his plans. When a plane crashes near their mountains, Porfirio discovers that everyone in the flight has perished, so he decides to get everything he can from the crashed plane before the authorities come looking for it. Porfirio convinces Ebodio to help him, and the two men plan to become rich with their discovery. However, as Porfirio gets more obsessed with his plan, the darker side of humanity begins to arise.

Written by director Carlos Enrique Taboada himself (as usual in his filmography), "Rapiña" is essentially a study about obsession, and the degeneration of a person, in this case Porfirio, as his obsession begins to take control of him. Interestingly, Porfirio's obsession is actually born from a noble ideal: he wants to improve the financial situation of his family, to discover the world beyond his small town, and to do something more with his life beyond working as a woodcutter. However, this initially noble idea begins to be slowly transformed into a dangerous obsession, bringing out the worst in Porfirio's nature in a similar way to captain Ahab in Herman Melville's novel "Moby-Dick; or, The Whale". If Porfirio is a wild passionate force driven by his obsession, Ebodio is the polar opposite, sharing Porfirio's desire to be rich, but keeping always a more rational approach, which makes him act at times as Porfirio's conscience. However, this also makes Ebodio to be constantly doubting about his actions, while Porfirio' intense personality makes him more active.

Shot mainly in location, Taboada makes great use of veteran cinematographer José Ortíz Ramos' work to capture the natural beauty of the Mexican mountains and at the same time, generate a dark and haunting atmosphere of despair and desolation. Taboada's visual narrative is elegant and subtle, and the story flows at a quiet, slow pace that suits the story's development (though it must be said that at times it does feel a bit too slow for its own good). The upside of this is that Taboada allows his characters to breath and grow, developing nicely the relationship between them and setting up the ground for their conflicts. And while the vast landscape of Mexican countryside is the background, in "Rapiña" Taboada keeps the story focused on the small group made by Porfirio, Ebodio and their respective wives. In "Rapiña", Taboada's pessimism about humanity is more than apparent, perhaps more than in any other of his films. particularly in his view that even the noblest intentions end up degenerated by our own flaws.

Certainly, the acting in most of Carlos Enrique Taboada's films tend to be a mixed bag, with some great performances placed along some truly awful. Fortunately, "Rapiña" is an exception in this aspect, as the four actors in the main roles make a great job in the film. As Porfirio, Ignacio López Tarso is a strong leading presence. While a tad overacted in his representation of an indigenous villager, his handling of Porfirio's descent into darkness is notable. Nevertheless, the film's highlight is without a doubt Germán Robles performance as Ebodio. The legendary actor literally disappears in the role and delivers a work so natural and vivid that gives enormous realism to the film. Another great work of acting is the one by Taboada's regular collaborator, actress Norma Lazareno, whom playing Porfirio's wife gives one of the best performances in her career. As Ebodio's young wife Josefina, actress Rosenda Monteros is truly effective, and rises up to the level of her cast-mates despite having a relatively minor role in the film.

With its great cinematography, beautiful locations and great work of acting, "Rapiña" is certainly one of Taboada's best efforts outside the horror genre. However, there are also several flaws that stop the film from being a real masterpiece, and unfortunately, most are related to Taboada's work as a director. Perhaps the film's greatest problem is that at times it seems to digress around certain plot elements for too long, with some scenes being unnecessarily slow and long. As written above, the slow pace allows a great deal of character development, and that's certainly welcomed; however, Taboada exaggerates a bit in this, resulting in some moments of tedium. It wouldn't be the first time that Taboada seemed to be so fond of his own screenplay that left things that could had been trimmed down. Also, despite the bigger budget Taboada had for "Rapiña", some special effects related to the plane crash look pretty bad, even for its time (being obviously beyond the industry's financial limitations), though this is certainly a much more forgivable flaw.

After his series of commercial low budget films done during the first half of the seventies, "Rapiña" inaugurated a new stage in the career of Carlos Enrique Taboada, a stage that soon proved to be one of more personal and mature filmmaking. Bleak and pessimist (and even a bit patronizing), "Rapiña" is an interesting character study about a man driven by his obsession into the darkest side of the soul. Despite its many flaws, director Carlos Enrique Taboada manages to prove in this ambitious film that his talent extended well beyond the constrains of the horror genre. In the end, "Rapiña" is worth a watch not because of its place in Taboada's filmography, but mainly to enjoy the great performances of actors Germán Robles and Norma Lazareno.