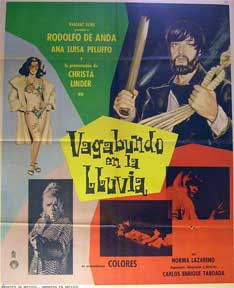 Through the history of Mexican horror cinema, the name of director Carlos Enrique Taboada remains as one of the most renown filmmakers in the genre. And his reputation is well cemented on his famous Gothic horror cycle of four films: "Hasta el viento tiene miedo" (1968), "El Libro de Piedra" (1969), "Más negro que la noche" (1975) and "Veneno para las Hadas" (1984). While Taboada worked in a wide variety of genres, it was his work in the horror genre what made him famous. Nevertheless, there is more in Taboada's horror filmography than his tetralogy of supernatural horror; immediately after the production of "Hasta el viento tiene miedo", Taboada began working in another tale of horror and suspense for producer Raúl de Anda. Released barely a week after "Hasta el viento tiene miedo", the new movie was "Vagabundo en la lluvia", a horror tale on a quite different vein than his better known films. Void of the supernatural horror and closer in spirit to psychological thrillers, "Vagabundo en la lluvia" is one flick that certainly deserves to be better known.

In "Vagabundo en la lluvia" (literally "Vagabond in the Rain"), young socialité Angela (Christa Linder) sneaks away from a costume party and rushes to her husband's lakeside vacation house. Angela is nervous, her husband is in the U.S. and she is expecting a visit, though what she finds at her house is something else. She discovers that the back door has been forced and that someone has taken food from the kitchen. Scared, Angela gets her husband's rifle and begins to search the house, finally finding a mysterious drifter (Rodolfo de Anda) hiding in the wine cellar. The drifter only asks for food and wine, but Angela orders him to leave. It's raining outside, and he asks for some shelter, but Angela refuses, and the drifter leaves the house. When he is gone, Angela returns to her car to get some things and discovers that someone else is in the back seat. It turns out to be Monica (Ana Luisa Peluffo), a wealthy woman from the party who passed out in the wrong car. Later, the arrival of Raquel (Normal Lazareno) will change everything, and the vagabond waits outside in the rain.

Written by director Carlos Enrique Taboada himself, "Vagabundo en la lluvia" is at its core a piece of psychological horror with the basic premise of the three women trapped in an isolated place being hunted by the mysterious stranger who stalks them from the outside. However, Taboada takes the premise beyond and what is constructed is a powerful drama between the three women inside. The three are very different between them, and the clash of their points of view about love, ethics, and life in general make up for a powerfully interesting conflict between the three women. Taboada builds up such a set of very well-defined characters whose passions, grudges and motivations alone would make for a quite interesting thriller; but on top of that there is the horror element of the drifter outside, which acts like a catalyst in the already tense environment inside the house. Taboada balances both story lines with care, although certainly the intricate chain of secrets surrounding his three complex female characters at times overshadows the drifter's plot line.

As a director, Taboada keeps a slow, retrained rhythm during most part of the film, letting the mysteries unfold with each new revelation, and only increasing the pace as the plot unfolds. Playing with the genre, he seems to shift gears every time a character is introduced, enhancing suspense and tension in every plot twist. As in his Gothic horror films, Taboada showcases a masterful use of cinematic elements in his narrative, particularly sound and cinematography to create an ominous atmosphere of dread. Cinematographer Raúl Domínguez, former camera operator of many B-movies, actually makes an more than effective job in bringing to life Taboada's claustrophobic nightmare. If in "Hasta el viento tiene miedo" Taboada had as dominant element the wind, in "Vagabundo en la lluvia" the director employs the heavy rain of its title to great effect, using the rain to symbolize that dangerous force of nature that surrounds the women, the drifter. The film also contains a certain dose of eroticism, an element that Taboada knew how to handle well in horror films.

The cast is particularly good in "Vagabundo en la lluvia", or at least the three main characters. As the young housewife Angela, Austrian actress Christa Linder delivers a very good job, effectively carrying the film and making a convincing portrait of a troubled woman trying to survive. However, it is Ana Luisa Peluffo who steals the show as Mónica, in a role that could had been easily a stereotype, but that Peluffo transforms into a more vivid and real character. With perhaps the most interesting character of the film, Norma Lazareno delivers a terrific performance as Raquel, whose twisted sense of ethics is set to judge the lives of both Mónica and Angela. Without spoiling too much, I'll just mention that Lazareno makes of the rage inside of her character something more than an emotion, she makes it her role's personality. As the drifter, Rodolfo de Anda is perhaps the weakest link in the cast, as not only he seems miscast, he also plays the part in such a wooden, stiff fashion that seems almost uninterested in the film at all.

Perhaps it is because of this last thing that ultimately, the menace of the drifter outside seems to take the backseat as the conflict between the three women becomes more interesting. As a writer, Taboada was prone to experiment with genres and narrative structures, and in "Vagabundo en la lluvia" he makes one of his most interesting screenplays by having the whole horror setting to serve as frame for this clash of points of view. Through the film, Taboada seems to make a statement about social classes, with every character representing some of the most negative aspects of their social condition. And yet, even when probably none is entirely "good" in the classic sense, Taboada manages to make them truly sympathetic, as he exposes each character's side with equal degree of care. "Vagabundo en la lluvia" is less about jump scares, and more about getting drawn to the lives of its three main characters, three women from different walks in life that perhaps are not so different once the true nature of their personal struggles is shown.

The fact that the horror elements are downplayed in favor of the characters' personal drama may be one of the reasons behind the oblivion in which "Vagabundo en la lluvia" is. Nevertheless, while lesser known than Taboada's famous tetralogy of Gothic horror, this complex piece of psychological horror ranks easily amongst the best work produced by this legendary director. With its set of complex characters, heavy emphasis on psychological horror and ultimately raw realism, "Vagabundo en la lluvia" is a true rarity in Mexican horror cinema, so fond of supernatural or fantastical elements for its horror. However, Taboada succeeds in crafting a suspenseful film in which it's demonstrated that there was more in him than Gothic horror.