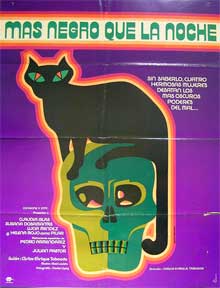 In Mexican cinema, the name of director Carlos Enrique Taboada is forever linked to the horror genre thanks to four films that made what is nowadays labeled as his "Gothic cycle". Four horror films that quickly earned a cult status due to their high level of craftsmanship and their ominous Gothic atmosphere. Of the four, the first couple, "Hasta el viento tiene miedo" and "El Libro de Piedra" are the better known thanks to their repeated exposure in Mexican television, however, the last two are movies equally as haunting despite not having the same level of fame. The third film in the cycle, titled "Más negro que la noche" (literally "Blacker than the night"), was released in 1975, and meant a return to form for Taboada after having spent the first half of the 70s crafting a series of low budget thrillers with a chiefly commercial goal. In "Más negro que la noche", Taboada returns to supernatural horror in a story about a haunting in an old mansion involving a group of young female friends and a black cat. A cat that's blacker than the night.

The story in "Más negro que la noche" begins with a death. Old Susana (Tamara Galina) is a wealthy rich spinster who lives in a huge mansion with the sole company of her beloved cat Becker, and Sofía (Alicia Palacios) the maid. Susana dies of a heart attack, and the only heir of her vast fortune is her niece Ofelia (Claudia Islas), now a young woman who had almost forgotten about Susana. Ofelia shares an apartment with three of her friends: Aurora (Susana Dosamantes), Marta (Lucía Méndez), and finally Pilar (Helena Rojo), who stays with them as she is considering divorce from her husband Roberto (Pedro Armendáriz Jr.). However, the inheritance has a condition, Ofelia must take care of Becker until his death. While all her housemates dislike cats, they all decide to accept Ofelia's invitation and live in the mansion with her. Soon strange events begin to take place in the house, specially as the girls seem to have little respect for the past. And it all gets worse once Becker is found death.

As usual, the screenplay for "Más negro que la noche" was written by Carlos Enrique Taboada himself, and amongst his horror films, it is perhaps the most "traditional" and straightforward of the bunch. Lacking the ambiguity and the complexities of his other horrors, it is certainly a simpler ghost story; however, this by no means make it any less interesting. "Más negro que la noche" is practically an exercise in developing a horror story at its most classic style, as Taboada plays with all the elements one can find in a typical ghost story: huge mansion, creepy servants, naive young people, black cat, and the darkness of the night. And yet, all the typical obsessions in Taboada's filmography find their place in the story, particularly the major running theme in his films (and not only in his horror ones): selfishness is payed with death. Perhaps the most notable element of "Más negro que la noche" is how as the story unfolds, it borrows some elements from Italian Giallo, as Aunt Susana's vengeance manifests in a quite physical presence.

Interestingly, the cast includes several actors who would later become big stars of Mexican cinema or TV (Helena Rojo, Pedro Armendáriz Jr. and Lucía Méndez), and for the most part the work done is effective. Unfortunately and exception is lead actress Claudia Islas, who plays Ofelia, as her turn is considerably weak and unconvincing. Certainly the lack of character development has a hand in this, but Islas' work pales in comparison with her three cast-mates. For example Helena Rojo, who plays Pilar, displaying a strength and passion in her role that Islas lacks. Susana Dosamantes is less fortunate, though she manages to come up as an effective actress that adds more than her natural beauty to the role. Her scene at the library is perhaps one of the film's highlights. Like Dosamantes, it would seem that Lucía Méndez was picked for the role based only on her looks, however, Méndez makes an acceptable role as the young and impressionable Marta. Veteran actress Alicia Palacios is a highlight of the film, as the loyal servant Sofía.

As written above, the film is an exercise of style over substance, and this is like a double-edged sword. On one hand, it's a masterful example of Taboada's brilliance when it comes to purely visual storytelling. But on the other, it's still a somewhat typical ghost story overtly reliant on the clichés of the genre. While this in no way demerits the film's craftsmanship (definitely one of Taboada's best in purely technical aspects), it certainly diminishes it's main impact, as ultimately "Más negro que la noche" can't avoid being a quite predictable movie with some pretty obvious twists and clichéd situations. In the end, this is after all a matter of taste, as certainly, a good classic ghost story never goes out of fashion, and in this way, "Más negro que la noche" certainly delivers the goods. It would only be advisable not to expect a groundbreaking narrative or unexpected twists, not even Taboada's familiar ambiguity or subtle subtexts. "Más negro que la noche" is set to be a traditional ghost story and that's what delivers.

As part of Taboada's thematic tetralogy of Gothic horror, "Más negro que la noche" certainly comes up as the weakest of the four, however, it is by no means a bad movie. As an stylish ghost story, "Más negro que la noche" ranks amongst the best of the 70s, with its striking visual style and its attractive cast, it's still a joy to watch. Despite its thin-layered plot, this gem of Mexican horror cinema is a quite satisfying ride full of thrills, perfect for a creepy night of scary movies. Perhaps Taboada's most accessible and commercial horror film, "Más negro que la noche" is the perfect introduction to the darker side of Taboada's filmography, a side that like Becker the cat, is blacker than the night.